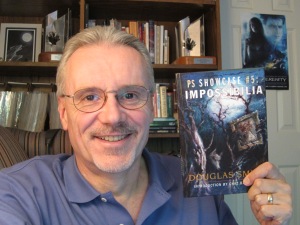 Author and Cover Photo of Impossibilia Courtesy of Douglas Smith.

course), I thought I would do a review of Douglas Smith’s short story Spirit Dance. Not only does this story feature werewolves, but also several other types of shapeshifters. Spirit Dance represents a blending of mythologies, combining European myths of the werewolf with myths from Canada’s indigenous peoples. When a non-indigenous person uses aboriginal myths, there is always a danger of misuse or cultural appropriation, and although Douglas Smith refers to elements of indigenous culture, he does this in a respectful way. For him, aboriginal myths appear to be part of the overall cultural mythos of Canada and his work shows a respect for Canada’s First Peoples as formative for the Canadian experience – he does not relegate aboriginal people to the background.  Unlike many authors, Smith does not put aboriginal people in the position of the cultural Other, nor does he try to put aboriginal people into the position of the “noble savage” archetype, trying to make them the holders of ancient wisdom.

As this was a short story, there was not room for him to explore the condition aboriginal people have been put in as a result of Canadian treaty violations, but hopefully he can expand on this in a later story. He does illustrate the uncomfortable relationship between the government and aboriginal people by showing indigenous people being mistreated by legal officers – in this case CSIS, who begins hunting shape-shifters to use their powers for undisclosed scientific ends. The parallels to the government use of aboriginal lands and properties for their own ends can be seen here with the exploitation of this group.

Smith’s story focusses on a small group of people living alongside human kind who predated the human population – a group of shape-shifters who the Cree people named Herok’a. This population is able to shift into specific animals – either deer, wolves, bears, or predatory cats. They are only able to take the form of one animal. Each of these beings only becomes a shape-shifter after being exposed to the body fluids of another shape-shifter (even if he or she shifts into a different type of animal). Only those with The Mark from birth are able to become shape-shifters, and although their powers are brought out by contact with another shape-shifter, they don’t necessarily shift into the same type of animal.

Similar to most modern werewolf stories, the shape-shifting contact behaves like an STD or blood-based pathogen, transferring through bodily fluids like blood, saliva, seminal or vaginal fluids. However, it is not treated as an infectious and dangerous disease as many werewolf narratives treat the werewolf bite. Instead, it is only shared through ritual and only if the person already has The Mark and requests to be changed into a shape-shifter. However, like many modern werewolf narratives, the shape-shifter is then free from contamination from any other disease (AIDS is specifically mentioned, likely due to the continuing fear over HIV infection in our society).

The shape-shifters have a close kinship with the animal kingdom, being able to take the form of animals and having an ability to communicate with them. This leads to a desire among several of the shape-shifting community to become environmental advocates. Smith uses this connection with the animal kingdom as a method of discourse about environmental mistreatment and the legal inclination to ignore issues of ecology and brand environmentalists as dangerous threats. In Spirit Dance several environmental protestors are killed when a logging company tycoon orders one of his drivers to drive over them while they are in a protest chain protecting an old-growth forest. The law does not charge them with murder and only fines them for poor machinery maintenance that causes this “accident”. The werewolf and other shape-shifters serve as perfect figures for examining the conflict between the human and the ecological, standing on the barrier between human existence and the animal, and part of the inescapable awareness that we are connected to all other parts of the environmental web. Smith, as many writers are beginning to do, wields the werewolf as a symbol for ecological issues, representing the fusion of the natural and the human in one form and representing an animal that is traditionally stigmatised as dangerous while also representing the deep woods and the image of untouched nature.

Smith presents a strong ecological mystery story where characters attempt to understand the root of this incident and his characters are forced into a space of moral question where values conflict with one another.

You can explore more about Spirit Dance and the rest of Impossibilia at http://smithwriter.com/impossibilia . You can get a copy on Kobo at http://www.kobobooks.com/ebook/Impossibilia/book-920BLiV38U2erq3geBWO7A/page1.html