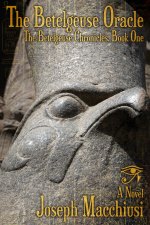 Cover photo of The Betelgeuse Oracle courtesy of Joseph Macchiusi

Joseph Macchiusi’s The Betelgeuse Oracle straddles the line between science fiction and fantasy, presenting an apocalyptic present that is partially scientific and partially supernatural, challenging the firm boundaries that are often placed between them.

Macchiusi’s protagonist, James, is a security guard at York University who has always had a slight penchant for visions, but when the world is suddenly bombarded with neutrinos from the dying star Betelgeuse and all electrical systems are destroyed, the human population of the world goes into seizures and people begin to change. James ends up acquiring a new voice in his head, the voice of the Egyptian god Horus. In this apocalyptic world, where technology has been permanently disrupted, James is forced to re-assess the way he views the world, gathering together a group of people to ensure survival.

The disruption of technology and electrical systems allows Macchiusi to explore our own dependency on technology and the technological deserts we have created that are our cities. He critiques modernity’s need for technology by illustrating the terror and destruction wrought by a world that has been denied something that has become a staple of our existence. In addition to needing technology for basic survival, Macchiusi notes that we have become information junkies, addicted to telecommunication, and one of his characters brings his disabled cellular phone with him everywhere as a form of talisman for the world that he pines for.

With the changes in technology and the neuro disruption caused by the pulse from Betelgeuse, people start becoming wholly unlike themselves, experiencing challenges to their identity and their selfhood as they are forced to do things that are out of character in order to survive.

Our society has reduced community down to the basic nuclear family, and James, a family man, is forced to challenge and change his notion of community as his family is lost to him. In order to survive, new community units need to be formed, based on mutual sharing, and the willingness to sacrifice things for strangers to survive. Characters cement their bonds to each other not just through sharing nutrients, but through shared stories, the telling of tales to one another that draw members together, inviting them into the process of creating new, shared myths and tales.

Like many apocalyptic narratives, The Betelgeuse Oracle, asks readers to question their dependencies on things around them and the danger of continuing on the path we have created. Through the vision of cities as wastelands of abandoned technology, deserts of lifeless buildings and suffering humanity, Macchiusi calls on readers to look critically at the society we are creating and our separation from the natural world.

To discover more about Joseph Macchiusi and The Betelgeuse Oracle, visit his website at http://josephmacchiusi.com/ .