I met Leah Bobet at CAN CON: The Conference on Canadian Content in Speculative Arts and Literature in Ottawa this past year. After chatting with her about her work, I wanted to share some of her insights with readers. You will have a chance to hear from her about her involvement in politics, studies of intersectionality, advocacy, supporting local food initiatives, disability, and the need for self-narrativisation on Wednesday, March 20 . It is great to see an author who is also involved in advocacy work, and her SF writing has a role in advocating for further diversity. 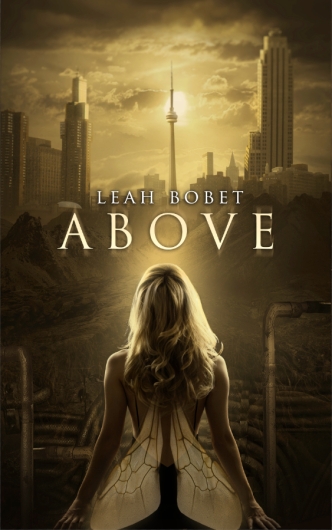 Cover photo of Above courtesy of http://www.leahbobet.com/fiction.html

In our interview, Leah Bobet discusses narratives of community, the dialogue between reader and writer and how this is influenced by their own experiences, trauma, writing people and not making characters into representatives of groups,

Here are a few teasers from our upcoming interview:

Leah Bobet: “Stories about kids in wheelchairs always had them sidelined as assistants to the nice, smiling, able heroes.  So one of the goals I had for Above was to write a story where disabled people were the heroes and the able people got to die tragically for their cause.”

Leah Bobet: “I think the role of speculative fiction in confronting bias depends very strongly on the reader, the book, and whether they’re ready for each other on the day they meet.”

Leah Bobet: “Books have made me question my biases and move past them.”

Leah Bobet: “I think stories basically are the defining factor of a community.  Identity’s a funny thing: We tell stories about ourselves (and others, and that’s where we get stereotyping), and when we compare those stories and they come up the same, we decide we’re the same.  Community is shared stories.  Community splinters when our worldviews – the stories we tell about the world – get too far apart.”

Leah Bobet: “The stories I was thinking of when I wrote Above were First Nations stories; the loss of language, poverty, colonial barriers, high suicide rates, and general slow genocide going on in our cozy little first-world country….The Idle No More movement has brought a lot more attention to those stories in the last few months, and I’m really hoping it doesn’t die in the next news cycle.  It’s too wrong, and it needs too much discussion, action, and righting.”

Leah Bobet: “Many people have stories they just don’t tell, even to themselves.  It’s always worth asking why.”

Leah Bobet: “Each individual author’s such a unique mix of their own influences, interests, and passions that I don’t know if the idea of national literatures can stay as it traditionally has: some notion of a geographical “character” that influences the stories we tell.”

Leah Bobet: “We’ve just gravitated to the stories that resonate with who we are, instead of telling stories and using tropes that are bounded by the place we were born.”

Leah Bobet: “Me writing young adult books actually happened entirely by accident!  When I wrote Above, it was in my mind an adult novel.  It was only in having my agent point out that there was a coming-of-age arc, as well as a young protagonist, in Above that I even entertained the notion that it could be published as YA.”

Leah Bobet: “Read fiction and non-fiction stories from and about diverse people: people of colour, disabled people, queer people, trans people, people whose religion is different from yours.  Think critically about them, and do some informed imagining of what the world’s like from their perspective.”

Leah Bobet: “I was a little nuts for the mythic when I was a kid – mostly Greek, Roman, and Inuit stories – because my childhood culture didn’t have a great sense of magic, and I wanted magic very badly.”

If you have not had a chance to read Leah Bobet’s work, you can check out my review of her novel “Above” at https://speculatingcanada.wordpress.com/2013/02/21/empowering-the-freak/ and can explore her website at http://leahbobet.com/