A review of Marie Bilodeau’s Nigh (S&G Publishing, 2015)
By Derek Newman-Stille 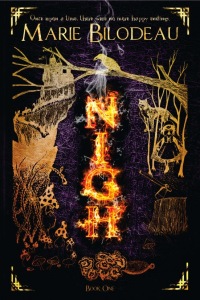 Cover photo for Nigh courtesy of Marie Bilodeau

There has been an incredible interest in apocalyptic scenarios. We are fascinated with the notion of “the end”. Whether zombies, environmental catastrophe, meteors, alien invasion, nuclear war… we are fascinated with the idea of an end of the story of human experience. Marie Bilodeau’s Nigh evokes creatures from humanity’s past, creatures who have been pacified in our recent cultural representations, but who nevertheless embody all of that otherworldliness of ancient myths and stories, creature who when encountered in ancient stories spelled doom … the fairies… and they have returned, angry at their long separation from our world and what humanity has done with it.
Marie Bikodeau’s title, “Nigh”, speaks to now-ness, a sense of the impending, but also, being a word that is rarely used in common parlance, evokes an old-timely quality, speaking to the past. It is a title that suggests a clashing of ideas about time, and Nigh, dealing with fairies, creatures who in myth alter time causing people to age hundreds of years in a night, evokes an idea of time clashing and past and present uncomfortably overlapping. The central image of this work is a watch, an object that promises a regulation and easy understanding of time. But this watch is different from what one would expect from a watch. As a family heirloom passed down through the generations and an object that has been the centre of family storytelling, this watch embodies memory, history, and myths – family legends told for generations. It’s position as a link between past and present may make it a key to understanding what is happening with the world as the fairies enter back into our world.
Marie Bilodeau explores the power of fairies to disrupt expectations, as figures who challenge the fixed, scientific, unchanging, rules-oriented way that we view reality. Fairies are figures that invert our expectations, play with our belief in ‘normalcy’ and illustrate to us that our world IS fundamentally topsy turvy, no matter how much we try to think of it as a place governed by understandable rules. The fairies of Nigh, like those of our myths invert the expectations of reality, assumptions about the assuredness of solid ground, materiality. Bilodeau takes away the sense of stability about our world, taking away our sense of the firmness of our world as the landscape becomes porous, allowing in  something different, something both familiar and strange.
This is a tale of uncertainty that challenges our comforts about a world that is ours and instead reveals to us that this world has always been something that contains an Other.
To find out more about Marie Bilodeau, visit her website at http://mariebilodeau.blogspot.ca/
To discover more about Nigh, visit http://mariebilodeau.blogspot.ca/p/nigh.html