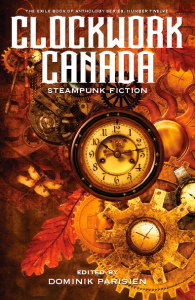 As much a horror tale as it is a steampunk story, Kate Heartfield’s “The Seven O’Clock Man” evokes the powerlessness of youth. Heartfield constructs a community where the late mayor had built a clock with a clockwork automaton in it who seeks out any children who are awake past 7 o’clock to turn them into wood. The mayor had viewed order and control to be central to his city, believing that the best means of exerting control was to create a persistent threat to the children of the community, punishing them for disobedience of community rules that are imposed on them. Like many communities that use fear as a means of securing power, the mayor made certain that any of the children who were turned to wood would become part of the clock, peaking through the clock’s doors when the clock struck the hour. The children held within the clock were frozen in horrified immobility, able to see the world, but controlled by the mechanisms of the clock, exhibiting the horror of absolute powerlessness.

As much as “Seven O’Clock Man” is a discourse on the powerlessness of childhood it is also a narrative about systems of colonial power. The mayor of the city was particularly interested in controlling aboriginal children, viewing them as a threat to the order of the city. He constructed the clock in order to force his notion of decorum onto the population of aboriginal children, symbolically representing the horrors visited upon aboriginal children in the residential school system where children were similarly taken away, locked up, and subject to threats and violence all in the attempt to force children to conform to colonial cultures. Most of the children frozen in the clock were Mohawk and the man who the mayor forced to wind the clock was also a man who came from a Mohawk family – Jacques. Jacques is forced to continue to wind the clock because his son has clockwork gears installed in him that wind down if the clock is not wound.

Heartfield brings attention to the depression and post-traumatic stress that comes from systemic colonial control and threats when Jacques’ wife Marie-Claire (a former slave) experiences regular depressive episodes, freezing in catatonia while her husband winds the clock. Her life of horrors shapes her ability to interact with her family and her frozen state mirrors the frozen state of the statues subject to the punishment of the figure in the clock.

Heartfield creates a sense of creeping horror with “The Seven O’Clock Man”, evoking the fear of being made powerlessness, subject to someone else’s will, and the emptiness that flows from being denied expression.

To find out more about Kate Heartfield’s work, visit her website at https://heartfieldfiction.com/