Blood and Spit into this Artwork.  A review of Andrew Wilmot’s “Fostering Artistic Talent” in Those Who Make Us: Canadian Creature, Myth, and Monster Stories Edited by Kaitlin Tremblay and Kelsi Morris (Exile, 2017)
By Derek Newman-Stille 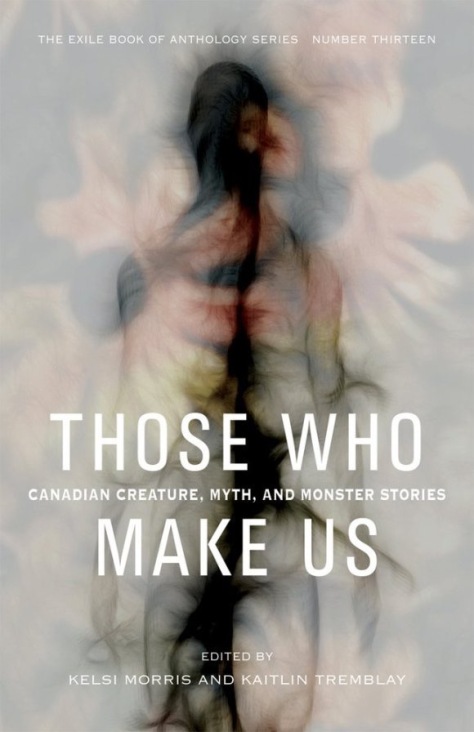 We are always told that art is sacrifice and we have embedded the idea of the suffering artist into our public imagination, but what about the suffering of the tools of our art. Andrew Wilmot’s “Fostering Artistic Talent” examines morals around artistic production and the relationship between the human and animal environment. Famous artist Samael kills cephalopods to produce art, using their writhing movements and fluid bodies to spread paint and bodily fluids around on canvases. Samael does sacrifice for his art… he just doesn’t engage in personal sacrifice.

Samael de-values animal life, seeing the cephalopods he kills as disposable art tools rather than as beings worthy of life and capable of suffering. By bringing attention to the clash between Samael and animal rights advocates, Wilmot’s tale brings attention to the complexity of artistic expression and the limits of artistic expression. This is a tale that engages in debate about animal agency, animal cruelty, animal intelligence and the ethics of art, inviting readers to engage in critical questions about aesthetics and animal life.

Wilmot purposely choses to focus his tale around animals that are generally not treated as aesthetically pleasing on their own, cephalopods, to bring attention to the critical issues around animal rights and the focus of animal rights discourse around cute animals. By including a cephalopod named Kandinsky, named after an artist itself, Wilmot brings attention to the idea of living cephalopods as art and his artist’s need to transform this beauty into his own artistic works instead of recognizing the natural beauty of the living, unmodified animal. He brings attention to human-centrism and the human conception of art as things that are modified and manipulated by us.

To find out more about the work of Andrew Wilmot, check out his site at http://andrewwilmot.ca

To find out more about Those Who Make Us, visit http://www.exileeditions.com/shop/those-who-make-us-the-exile-book-of-anthology-series-number-thirteen/