In the comic “Star Kid”, Ronnie Ritchie intertwines autobiography and ideas of magic. They use ideas of astology to understand themself, sharing their early fascination with sun and moon symbolism and the relationship between these celestial symbols and gender (since the sun and moon are gendered in many European cultures).

Ritchie explores their love of stars from an early age as a symbol that is often seen alongside the sun and moon, but also the power of the star to separate them from the gendered characteristics of the sun and moon. Despite their love of astrology and stars, they describe the challenge of growing up in an Evangelical home where astrology was considered evil, and their subversive claiming of the star symbol. They use the artistic medium of the comic to illustrate their love of illustrations, showing the way they combined sun, moon, and star symbols together in their early art.

Stars, suns, and moons became metaphors for gender for them in their exploration of their own gendered identity and they frequently drew characteristics of gender and characteristics of the sun and moon together, realizing that these descriptions were too limited to capture the complexity of their identity. Being a nonbinary person, they discovered the potential of being outside the orbit of the gendered sun and moon in a space they created – The Star. They illustrate that the symbol of the star allowed them to find a symbol of joy, happiness, and cuteness (they make sure to distinguish the marshmellowy stars in their art from the actual huge balls of nuclear fire).

Ritchie cleverly combines autobiography with hints of the speculative and the magical, pointing out that we often explore complex ideas through symbols. People have been exploring their identities through astrology for a long period of time, and Ritchie’s use of astrological symbolism in understanding their gendered identity takes the astrological into a new sphere of contemplation. They illustrate that the symbolic is still an important realm for contemplating identity, particularly since so many of our social symbols are gendered.

To find out more about We’re Still Here: An All Trans Comic Anthology, visit Stacked Deck Press at https://stackeddeckpress.com/product/were-still-here-an-all-trans-comics-anthology/

To find out more about Ronnie Ritchie, visit their website at https://www.rritchiearts.com 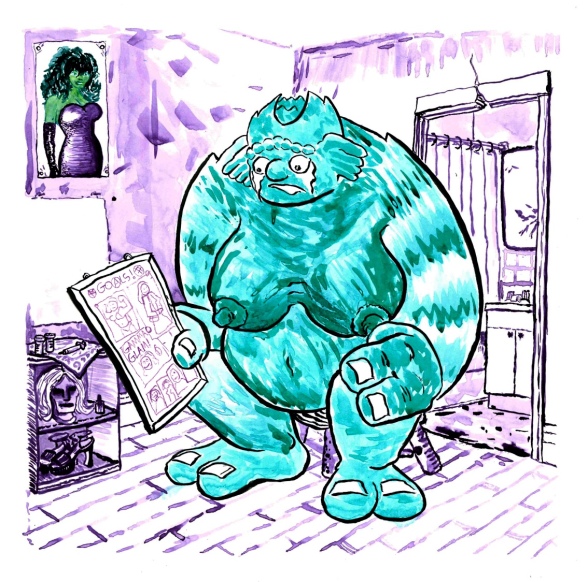 A Green Monster Who Isn’t Envy

In “Abominatrix”, Morgan Sea plays with the notion of Marvel Comics’ She Hulk and produces another gamma powered superhero. Sea’s hero is a Trans woman who adores She Hulk, and decides to take a shot of gamma infused chemicals as part of her transition. Instead of ending up looking like She Hulk – a green-skinned, powerful, beautiful woman, she ends up looking more like the Hulk villain, the Abomination. Instead of becoming a villain as Marvel comics characters tend to do when they have lived a life of oppression and don’t become beautiful superheroines, Trixie tries to live her life as she always has. She reminds herself “They’ve always treated you like a monster. They’ve always wanted you to hide”, so she decides to practice radical self love instead. While out on the streets, she continues to be subject to social violence – insulted by passers by, having drinks thrown at her. While being subjected to violence, she has to constantly reassure other people that they are safe from her instead of being concerned about her own safety. Even when she wants to use the washroom, she is told that she would need to use the men’s toilets instead of women’s toilets. 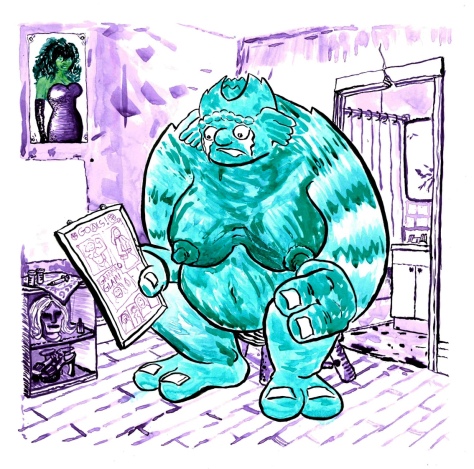 When Trixie finally decides to act back against all of the social violence she experiences, she ends up fighting another gamma powered hulk and the two of them end up crashing through spaces of oppression like a pharmacy where a doctor is refusing a Trans person their meds, a bank where a Trans person is being denied a loan for their electrolysis machine, and a classroom where a teacher is trying to force children to believe only in binary genders and that gender is unchangeable. This is a comic about smashing heteropatriarchy and Morgan Sea reminds us that we can’t accept violence and sometimes we need to act back to prevent that oppression.

Sea plays with some meta fictional elements of her comic, writing Trixie’s inner dialogue with the awareness that she is a comic character. She uses language like “Just got to take it step by step, day by day, panel by panel” and “See you are almost off this page!” to remind readers that this is a self-aware comic, a comic that is purposely raising questions and critiques about the mainstream comic industry. “Abominatrix” invites us to ask questions about the absence of Trans characters in most superhero comics (where Trans characters often only appear as villains) and asks us to question the portrayal in comics of a character who is done being subjected to violence and decides to speak back. As I mentioned above, the characters who act back against social violence in comics are generally treated as villains and the role of heroes is often to reinforce the status quo. Sea’s comic is about challenging the simple narrative of mainstream superhero comics and inviting an awareness of the absences and vilifying of characters who stand up for social justice. She asks us to think about how we create our monsters and the ideologies that go into producing those monsters.

To find out more about Morgan Sea, visit her website at https://morgansea.wordpress.com

To find out more about We’re Still Here: An All Trans Comics Anthology, go to https://stackeddeckpress.com/product/were-still-here-an-all-trans-comics-anthology/