A review of The Champions: Northern Lights (Marvel Comics, 2018) 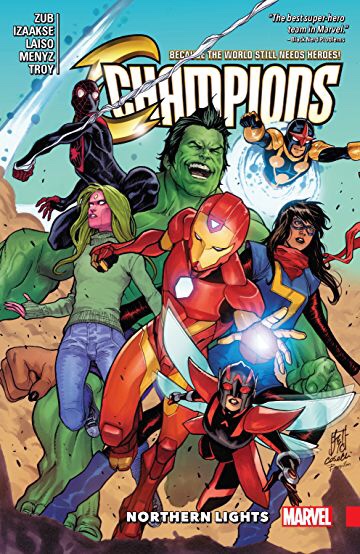 Although an American comic created by Marvel Comics, The Champions: Northern Lights is set in Nunavut and features some distinctly Canadian elements.

Firstly, the superhero team Champions comes into contact with Alpha Flight, another Marvel Comics creation – a superhero team set in Canada and created by Canadian John Byrne. It is extremely exciting seeing Alpha Flight continuing to appear in Marvel Comics since they haven’t had a series of their own in many years. The current Alpha Flight appears to be under the control of American Captain Marvel and features figures like Puck, Snowbird, Talisman, and Sasquatch.

Beyond just the Alpha flight connection, the comic features ideas of The North, setting the story in the winter and connecting the story to critical questions about global warming and the Arctic thaw, engaging questions about Canada’s relationship to the North and the idea of Canadian paternalism of Northern landscapes. The comic raises questions about the relationship between English and Inuktitut language, and explores the invasion of Inuit lands by a white man who believes he is doing the right thing and who steals resources from the landscape. As often happens, indigenous protestors mobilize to protect the landscape from continual colonial oppression and exploitation and from illegal resource extraction and attempts to assert white authority over indigenous land.

Champions raises critical issues for current Canadian issues around the attempts by the Canadian government to build a pipeline through unceded indigenous land. Currently, Wet’suwet’en protestors are seeking to protect their land from the Kinder Morgan natural gas pipeline that is being built through their territory and once again, a white, male, colonialist power is seeking to invade indigenous land for a nonrenewable resource.

In the Champions: Northern Lights comic, the colonialist, white person invading indigenous land calls himself The Master, highlighting ideas of power hegemonies and the exploitation of indigenous people. Moreover, the nonrenewable resource that he seeks to exploit in this case is the literal “Soul of the North”, a goddess named Sila. Indigenous protestors in the comic call out The Master, telling him: “face your crimes, corruptor!”.