I recently read a fascinating article by Michelle Nijhuis, who gender-swopped Bilbo in The Hobbit when reading to her little girl to try to introduce her daughter to a strong female character in a fantasy narrative. You can explore the article here http://www.lastwordonnothing.com/2013/12/18/one-weird-old-trick/ .

When I read it, I thought about what an effective strategy gender swopping could be for teaching students about gender constructions and the way that gendered assumptions infiltrate our written work. When we take a written work (or even just a passage from a written work) and swop the gendered pronouns, we bring critical attention to the way that we create notions of gender.

Fan fiction has been gender swopping characters for a long time as a way to insert a feminine voice into narratives that exclude women or write them into stereotypical roles, so this is not a new idea, but I thought that it could occupy an interesting place in the classroom, and in personal education.

I tried this activity out yesterday in an English course on gender theory at Trent University. I thought gender swopping would be a really interesting way to get students to examine power structures implicated in writing gendered narratives and start to question some of the stereotypes and beliefs that are assembled with our constructions of gender. Students were given three different short stories and asked to pull out passages that they thought would be fascinating for gender swopping. This was only the second week of a half course, so I thought that it would highlight for students the important work that feminism still needs to do in challenging gender assumptions and that it would also help to introduce students to passage analysis (since they could examine the whole passage from a different perspective, individual lines from the passage, or even the different significance that an individual word takes in constructing ideas of gender).

Students pulled out passages that highlighted constructions of masculinity and femininity and were able to note the framing narratives that were built around gender and the dependency that these narratives had on gendered assumptions. The activity was a powerful critical moment to bring stereotypes under the umbrella of question… but they also allowed students to laugh at these constructions and disempower the gendered power structures by finding them amusing.  Students stated that they found the activity interesting as well as enlightening and that it focused their attention on passages they otherwise wouldn’t have noted.

I would recommend having a few passages to fall back on if students aren’t immediately able to pick out some passages that are of interest to them. Generally, you should only need to point out a few passages and gender swop them before students get the idea and begin finding really potent passages on their own.

I did point out that “gender swopping” is problematic because it assumes a binary gendered system and excludes third gender options, but I thought this was a potent way to examine these gender stereotypes.

Remember, education doesn’t just happen in the classroom, so for those of you who are not teachers, parents, or students, consider gender swopping a few passages from your favourite Canadian Speculative Fiction to examine the ways that gender is constructed in the books that you are reading.

Even when authors create worlds of the future or the different worlds of fantasy, a lot of our culture’s own gendered assumptions end up filtering into these works. It becomes difficult to imagine a world with different gender roles when our minds and thought processes are so embedded in gendered dichotomies and assumptions about “proper” gender roles.

If you are an author reading this post and want to look at the way you examine gender in your own work (and maybe challenge some of these assumptions and propose some innovative new gender roles), consider gender swopping your characters to see how you may have unconsciously applied current gender assumptions on your characters.

Here is the activity that I proposed to my students. Feel free to use or adapt it as you wish:

Gender swopping characters can be an effective way of bringing your own critical attention to the constructions of gender and gender stereotypes in the text you are analyzing. By switching the gendered identity of characters, you can highlight the way that gender is constructed and the specific assumptions around gender that shape the author’s work.

What are some key elements of the texts we are examining that a gender swop brings attention to?

Pull a few paragraphs from the text and gender swop the characters. What does this new gender configuration suggest to you?

How has it highlighted some gendered issues and problems of representation? Make sure to chose elements of the text that are particularly gendered or do fascinating things with gender.

What are some of the things you notice about the new gender configuration?

What did you find amusing about the gender swop?

How did the character read differently as male/female?

Why did this passage particularly interest you or catch your attention?

What stereotypes about gender did you first notice?

How is femininity constructed?

How is masculinity constructed?

In what ways does power shape these assumptions?

Who in the narrative is constructed as the object of desire?

Who is constructed as the active desirer?

How are descriptions of characters different when they are male or female? What is different about the features or attributes that the author focuses on when she/he discusses male characters versus female characters? Why do you think the author is focusing on these characteristics and what does it say about gender constructions?

What notions of “active” and “passive” underlie these gender assumptions?

What did you expect to find? How has the passage differed from your expectations? 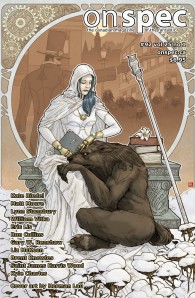 Most SF authors write from their offices or living rooms, venturing into space in the realms of the mind, touring imaginary landscapes…. but what happens when an SF author ends up on an alien world? According to Gary Renshaw’s “Vacation”, odds are he or she would be very annoyed.

Harlan Smith is a SF author who, while travelling through space, ends up in a life pod escaping a rapidly exploding starship. He crash lands on an alien world and is immediately met with the irritation of adapting to an alien environment. Surrounded in flies that squash onto his face like snot, followed by loud and obnoxious wildlife, and generally beset with the irritations of trying to adapt to a new environment with very little awareness of what to expect… Harlan finds himself incredibly annoyed.

Sci Fi authors often portray delving into the unknown, seeking out new life and new civilisations as fundamentally an exciting process. Motivated by curiosity and the desire for adventure, protagonists jump into their new worlds with the skills to survive. Through the eyes of Harlan Smith, Gary Renshaw points out the flaws in these assumptions. He shows the danger of mundane things on alien worlds, where seemingly normal things can be deadly and when they aren’t deadly, they can be irritating enough to wish for the more deadly aliens. Who wants to seek out new life when it turns out that those new lifeforms are not quite fascinating, but more irritating than anything else.

In this cruel twist of fate, Renshaw puts a sci fi author in the position that they often put their protagonists and allows him to be subject to the irritations that sci fi authors often visit upon their characters.

To find out more about OnSpec, visit their website at http://www.onspec.ca/ .

If you are curious about Gary W. Renshaw’s other work, visit his website at http://trilunar.ca/index.php .