How many spaceships are wheelchair accessible? Do office buildings create light shielding for the undead who might be singed by solar exposure? Can my guide dog be a werewolf? Does one need to simply WALK into Mordor… or can one wheel in instead? SF has an interest in the body, whether it is the augmented body of sci fi, the body horror of the gothic, or the magically altered body of fantasy, and it is worth looking at the way disabilities are portrayed in Canadian SF.

Speculative fiction often explores the figure of the outsider, particularly the body that differs from the norm, and people with disabilities are often the subject of interest by SF authors. SF readings of the disabled body often speak to the way that disabled people are ‘read’ in our world and our time. This episode examines the interest in bodily difference and in treatments of the disabled body that can be either empowering or intensely problematic.

Among the positive portrayals of disability in Canadian SF that are discussed, we take a look at

Click on the icon below to hear the full radio programme.

This audio file was originally broadcast on Trent Radio, and I would like to thank Trent Radio for their continued support. 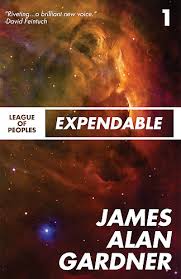 Fans of Star Trek will recognise the term “Red Shirt”, but for those who haven’t seen Star Trek, “Red Shirt” is the term for people on away missions who die to provide plot fodder for the main characters to grow and develop. Generally these plot victims are garbed in red uniforms. I thought it was apt for the title of this review.

In James Alan Gardner’s Expendable, he presents a future in which the admiralty has decided that the only people that should be allowed onto planets on dangerous missions are those who society “won’t miss”. In a society that is hyper-focussed on beauty, the admiralty discovered that people are less inclined to miss those that don’t fit into the social norms of aesthetics for the human body. Even though medical technology has been created that can ‘heal’ any disability and modify any appearance to fit with social body aesthetics, doctors are discouraged from performing surgery to modify appearance as long as the person can appear ‘unbeautiful’ but is still capable of performing duties.

The disabled and disfigured have become a disposable class, put into danger because the admiralty has recognised that people are less distraught by the deaths of those who they consider ugly.

When Festina Ramos, a member of the Explorers (or, as they call themselves, the Expendables) who has a large birth mark on the right side of her face, is sent down to a planet well known for killing everyone who arrives on it, she comes into contact with a species that is obsessed with aesthetics – beauty and perfection. This world, Melaquin, is populated with people who, through genetic manipulation, have developed bodies of glass, transparent, but idealised and impervious to harm or aging.  Their bodies are so perfect that they have lost their motivations, their desires, and passions. These “alien” Melaquin people believe that it is a moral imperative to be perfect (with an almost religious fervor). They ask the Explorers who visit them why they would maintain the appearance they have since it makes people “sad” to look at them, hating the involuntary shared suffering that they experience when they contemplate the loneliness that aesthetic difference must cause to people who are made outsiders.

Gardner questions ideas of beauty and perfection in Expendable, presenting a future in which bodily difference is discouraged and those who look different are considered to be less worthy of survival. The alien world and beings in it are not so different from us, trapped in the same patterns of fear of difference and desire for conformity to bodily norms and ideals. Purposely made of glass, this world’s “aliens” are transparent in their fear of difference, in their dislike of diversity, and in their ability to represent our own society’s distaste at bodily difference and imposition of social “norms” of perfection.

Gardner explores images of colonialism in his novel, looking at a society in which “expendable” people are sent down to planets to explore them for the potential for human occupation. Like many who deal with ideas of colonialism in SF, he explores the sexual imagery associated with colonialism – the image of “penetrating” a new environment and “seeding” a new world, however, he makes this imagery explicit. The space drive that he creates uses a field generator for interstellar travel that the travellers have colloquially called the “sperm field” – it creates a white, milky bubble around the ship with a trailing tail that whips back and forth(flagellating) like spermatozoa. This tail is also used as a transporter system to deposit crew members on planets – literally whipping down to the planet and then ejaculating crew members onto the surface. He explores this image of colonialism as a form of forced penetration and impregnation. It is fascinating that Festina Ramos, the crew member who questions the damaging impact of human beings placed on the planet Melaquin, is also someone who saves and rescues eggs from various planets since they are the female equivalent of the sperm, situating her as a figure who is rescuing the feminine from contamination by exploration.

Thank you to Alissa Paxton for recommending this novel to me.