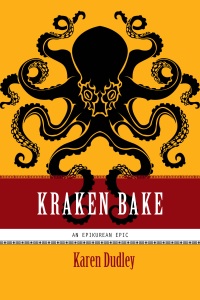 Reputation and rumour – they are incredibly interlinked, especially in ancient Athens, and particularly for a celebrity chef whose entire reputation and business depends on being the current talk of the town. Karen Dudley’s Kraken Bake follows Pelops, first introduced as Athens’ newest mythological prince turned celebrity chef in Dudley’s first book, Food for the Gods. Pelops is now even more seasoned and his attitude is perhaps a bit more spicy than it was in the first book.

Kraken Bake explores the notion of gossip, the idea that people are created in the public arena and their identity is partially based on the way they are talked about, particularly when their business life depends on the public’s view. Pelops encounters another figure dependent on celebrity status, but one that is perhaps more attached to the role of the classical world: Perseus, a hero who has just returned from slaying the Kraken. Perseus entered the Athenian Agora (marketplace) long before he arrived in the form of rumours, tales of his exploits, and the arena of public opinion. When he arrives atop Pegasus, a winged horse, public opinion is confirmed: this is what Athens has been looking for, a genuine hero who they can wine and dine and gain status by showing connections to.

But this hero and Pelops have something in common: a connection to the god Zeus (Perseus is his son and Pelops his grandson), and both have a mixed relationship with the Kraken: Perseus’ slaying of the Kraken may not have happened quite as society has imagined… and Pelops has discovered that although he can cook anything else into a delectable treat tasty enough to make the gods weep, he can’t cook Kraken. Perseus’ conquest of the Kraken has already passed, but Pelops heroic quest has just begun, particularly when he discovers that the Athenians want to have a very public cook off, the Bronze Chef competition, and he is fairly certain that the secret ingredient will be Kraken meat.

Karen Dudley playfully blends Greek history and Greek myth together, not particularly concerned with veracity or timelines, and this adds to the sense of whimsy of her work, but also serves to undercut the notion that history itself is a story, a tale made up of rumour, myth, legend, and assumptions. Anyone who has read their Herodotus (the father of history) should know this from the gossipy and creative way he discusses Greek lives. But there is a magic in telling tales, whether they are mythic tales or general discussions of public figures and Dudley reminds us that we are all myths and legends being constantly formed through public discussions: gossip, rumour, debate, and reputation.

To find out more about Karen Dudley, visit her website at http://www.karendudley.com/ .

To find out more about Kraken Bake and other great Ravenstone books, visit their website at http://www.ravenstonebooks.com/authors/Karen-Dudley.html

“I swear, I do not know how word travels so quickly. It’s a magic far stronger than mine.”