Coming of Age With Super Powers

A review of Mariko Tamaki’s Supergirl: Being Super (DC Comics, 2018). 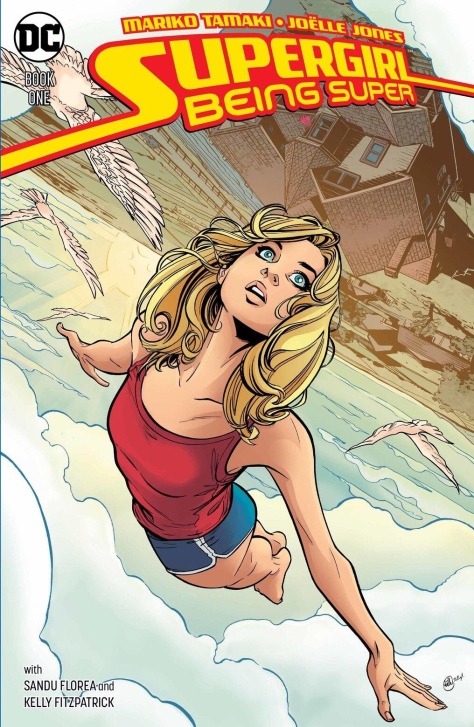 Canadian comic writer and artist Mariko Tamaki has frequently explored coming of age and that fascinating experience of being between childhood and adulthood in comics like Skim and This One Summer. She shows an incredible ability to draw her readers into those moments in our own past where we were in that awkward state of transition between childhood and adulthood and we sought out our own identities. in Supergirl: Being Super, Tamaki unites the awkward time of questioning identity in our teen years with the figure of the superhero… another figure for whom identity and transformation are a central issue.

We all remember what it was like to be a teenager and feel like we are in the wrong skin and like we don’t fit into our society… but that is magnified for Kara Danvers, a girl who just got her first pimple and exploded it all over her bathroom…. literally. Along with her friends, the young lesbian Dolly and track star Jen, Kara is seeking out what it means to be a teenager… but she is still holding back a secret from these friends. It turns out that her feeling of alienation comes from actually being an alien. Kara is from another planet.

Tamaki frequently explores the idea of being an outsider and what it feels like for a teen who is treated as though she doesn’t belong… as though her entire existence is at conflict with the world around her. In Kara Danvers, Tamaki is able to explore what it means to ‘pass’, keeping an identity secret from friends, teachers, and all of those around her, what it means to worry about being a danger to everyone around her, coping with post traumatic stress, exploitation, rejection from family, and the death of a classmate… along with the desire to do something to make this world a better place. Tamaki’s Supergirl is someone who holds onto the idea of hope that people will become better even when she is constantly faced with disappointment from a human race that is still shaped by bigotry, intolerance, exploitation, and hate.

“How can you hate a whole group of people without knowing the individuals? That’s stupid prejudice. It isn’t fair or realistic. Each of them is different and you’re lumping them all into one bad group based on what they could do as opposed to what they are doing or willing to do.”