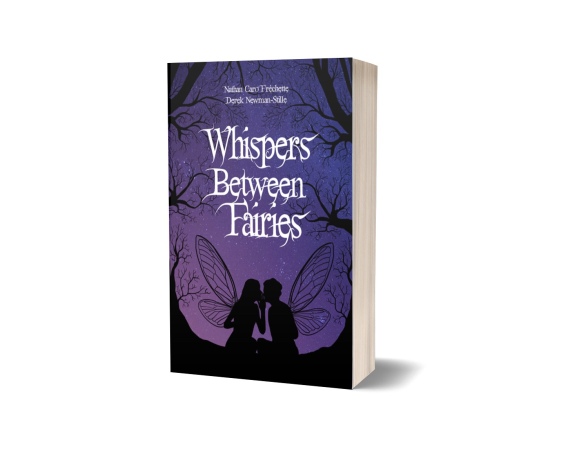 A review of Nathan Frechette’s “Cinderfella” in Whispers Between Fairies (Renaissance, 2020)

Nathan Frechette’s “Cinderfella” is a biotext, a story of Frechette’s own body and transition told through fairy tales. Frechette explores the way that fairy tales have shaped his life, from providing a world away from a harsh outside world when he was young to providing a text of transformation while he was going through his transition.

Frechette illustrates the need for more Trans fairy tales, especially since his tale explores the pain of transformation and the worse pain if he wasn’t able to transform. He reveals “Fairy tales and fantasy were such a safe world for me; tales of transformation in particular gave me hope that someday I could grow into myself, that someday I might find my true body, my selkie skin, that a blue fairy would descend from the skies and make me a real boy”. He explores the idea of a selkie skin, an image he also explored in his story “Skin” in Over the Rainbow (Exile, 2018). A selkie is a creature from Irish and Scottish lore who is a human who wears the skin of a seal. If this skin is stolen, the Selkie becomes under the power of the person who steals that skin and becomes their obedient and powerless partner. This notion of shedding and returning skin is a powerful one for Frechette, allowing for the examination of the way gender, body, and identity are intertwined with social expectation and social control. Frechette uses the image of the selkie to explore his own transition, interweaving this with the image of Pinocchio’s magical transformation by the blue fairy.

However, Frechette also examines the pain and work of transformation. He observes that “Just like a fairy tale, though, everything came at a price. There were trials, and I had to prove my worth, mostly to myself. Just like the little mermaid, I had to sacrifice my voice and endure pain as my transformation got underway. Just like Pinocchio, I had to struggle through the lies I told myself to find my truth and be worthy of change. Just like Cinderella’s prince, I had to see through the appearances and misconceptions of the world to find and embrace my love”. Transformations and transitions both take time and come with barriers and new ways of looking at the world.

“Cinderfella” is a tale of self discovery and the magic of seeing fundamental truths about oneself. Frechette says “There once was a little boy whom no one could see. All who looked upon him could only see the girl he appeared to be. The illusion was so complete that even the boy could not perceive his true nature, only a sense of discord and discomfort with his false skin, and an uncontrollable, unfathomable, and ever-growing rage”. Frechette powerfully describes the pain of dysphoria and the internal conflict inside of himself before he transitioned.

In “Cinderfella”, Nathan Frechette writes his own body through fairy tale, using ideas of transformation from multiple fairy tales to weave them through his own narrative and in some ways his own body. The act of rewriting is a powerful one for Trans authors, a way of articulating one’s own identity where society had originally written a different identity upon our bodies. In “Cinderfella”, Frechette rewrites not only the fairy tale traditions he draws upon, but the texts that have been written over his body in the past and through this weaving of tales, he articulates himself.

To discover more about Nathan Frechette, visit his website at https://nathancarofrechette.ca

To find out more about Whispers Between Fairies, visit https://renaissance-107765.square.site/product/whispers-between-fairies/197?cp=true&sa=false&sbp=false&q=false&category_id=2