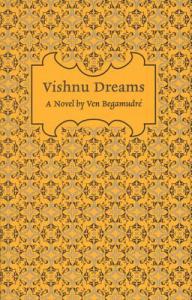 The Hindu god Vishnu sleeps and dreams the lives of mortals in Ven Begamudre’s Vishnu Dreams, allowing for the intersection of Hindu cosmology and the physical reality of everyday existence. Tales of the Hindu gods are interspersed amongst a seemingly magic-less narrative.

Stories and sacred tales become the binding feature of this novel, allowing for the continuance of an Indian Hindu experience even when displaced from home and living in North America. They become the support structures to hold onto to find a sense of place, an idea of belonging in a place that actively seeks to exclude them. Durga and Subhas move to Canada from India and then to the United States, where they find that their sense of community is disrupted. In school, they are enwrapped in the American love of their own history to the exclusion of the diversity of other histories and find themselves searching for some place to find themselves. They have to perform the identities of the North Americans who surround them, often pretending to fit in even when the behaviours around them make no sense and conflict with their own morals. Subhas, for example, is horrified at a pep rally where the entire school is called upon to recite the word “kill” as an expression of the desire for success in sports, and mouths the words along with the rest of his schoolmates while looking with horror as even other outsiders are brought into the collective madness around him.

The use of scenes of the Hindu gods speaking to one another also contribute to this sense of dislocation and also a sense of the greater significance of experiences. The gods appear in random sequences throughout the narrative, seemingly unconnected to the general events taking place for the youths that are the focus of the realist half of this narrative. However, when one wonders why the gods are appearing, one remembers the statement early in the novel that Vishnu dreams the lives of mortals, and one realises the sense of connection between Indian people in diaspora and the greater connection between the Indian population and Hindu peoples. Even when in a new location, there is a sense of home that binds people together, linked through religious tales and myths – a common binding between people that is constructed in the telling of narratives and the binding of words from stories. Begamudre reminds readers that stories have power; that they connect people in significant ways and help them bring a sense of home and community with them wherever they go.

Begamudre’s interplay between a realist narrative about adapting to an unfamiliar and unaccepting place and the cosmological reality of Hinduism presents interesting genre questions. Is this a Speculative Fiction novel or is it a religious realist novel? I decided to include it on Speculating Canada because of its ability to ask questions and push the boundaries of mundane reality, suggesting an intertwining of religious reality with the physical. This is not meant to suggest that I doubt the cosmological significance of Hinduism or the reality of Hindu beliefs, but rather to acknowledge the speculative potential of intersecting cosmologies.

You can find out more about Vishnu Dreams at the Gaspereau Press website at http://www.gaspereau.com/bookInfo.php?AID=113&AISBN=0