A review of Cait Gordon’s A Night at The Rabbit Hole in Alice Unbound: Beyond Wonderland edited by Colleen Anderson (Exile, 2018) 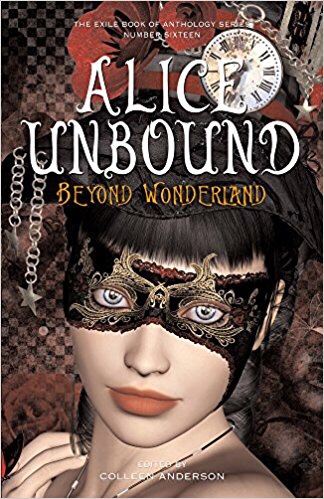 Alice in Wonderland is a story that plays with identity, disrupting the power that normativity has on our society. Cait Gordon has tapped into that power that Wonderland has to resist normativity and creates a GenderQueer Alice who has just come out and taken on their new name and pronouns. It is refreshing to read a story featuring a GenderQueer character that is not about the struggles of occupying their identity. In A Night at The Rabbit Hole, Alice is instantly accepted for their gender and people don’t slip up and refer to them as anything other than “them” after one quick correction.

Gordon uses the Alice in Wonderland text for its power to disrupt power structures that erase identity possibilities and instead writes a story filled with potential and possibility.

A Night at the Rabbit Hole is a tale about a meeting in a dance club where Alice is given a pill that transforms their perspective and gives them an expanded view of the world around them, allowing them to see through human disguises to the creatures beneath. Gordon plays with the question of what could alter someone’s perspective like the “drink me” potion and mushroom that Alice takes in Carroll’s story and ultimately comes up with the connection to club drugs. After Alice took their pill (here called a “tart”), I have to admit that the Jefferson Airplane song White Rabbit was running through my head as Alice’s perspectives were warped, and I think that Gordon intended to plant this trippy tune in the minds of her readers.

Cait Gordon’s characteristic playfulness comes through in this tale of altered reality and questioned norms and she invites readers to chuckle at clever witticisms at the same time as they speculate about possibilities beyond the simple world that they live in. This is a story that empowers at the same time as it entertains

To discover more about Alice Unbound, go to http://www.exileeditions.com/shop/alice-unbound-beyond-wonderland/

To find out more about Cait Gordon, visit her website at https://caitgordon.com