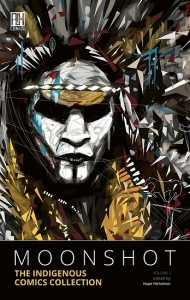 The comic book industry has generally had an exploitative relationship with indigenous peoples. Generally indigenous peoples have been portrayed in comics as villains or sidekicks and their character development limited to cultural stereotypes and one-dimensionality. In superhero comics, generally even the superpowers of indigenous superheroes have been expressions of cultural assumptions – communal relationships with animals and trees and special connections with nature. Indigenous people have often been portrayed as extensions of the landscape. Hope Nicholson’s “Moonshot: The Indigenous Comics Collection” tries to open up a space for indigenous stories that come from indigenous peoples. The collection features the work of 30 authors and artists expressing diverse stories that render indigenous voices into image and written word.

Often when asked to contribute to collections that interact with cultural and artistic expressions, indigenous people are encouraged to talk about the past, which problematically structures indigeneity as something of the past rather than a vibrant, current culture. This collection emphasises the vibrancy of indigenous culture, including tales from the past, but also modern adaptations of these tales, new tales of the present, and science fictional tales of the future. These are tales of superheroes, animal spirits, dark figures from the water depths, space travellers, futuristic inhabitants of other worlds, encounters with otherworldly and sometimes extraterrestrial beings, encounters with possession, tales of robbery and recovery, robopocalypses, and environmental travesties.

David Mack plays with the interaction of indigenous identity and Deaf culture in his superhero character Echo, who explores her understanding of herself as a Deaf indigenous woman. David Robertson and Haiwei Hou play with light and colour as they play with the Cree tale of Ochek the Fisher and opening the world to new light. Dayton Edmonds and Micah Farritor use animal and anthropomorphic animal spirit forms to tell the story of the gathering of bright stones to become the stars and Coyote’s accidental scattering of the stars across the canvas of the sky. Sean and Rachel Qitsualik-Tinsely and mention3 tell the story of the Qallupiluk, a figure from Inuit tales who rises out of the cold water. Arigon Starr and David Cutler tell a cross space future version of “The Young Man Who Turned Into a Snake”. Elizabeth LaPensee and Gregory Chomichuk use only visuals to tell the tale of a hunter encountering the Star People. Michael Sheyahshe and George Freeman tell a tale of two brothers with special gifts who seek to solve the disappearance of their mother on an alien world. Tony Romito and Jeremy D. Mohler tell an arctic tale of an inuit hunter who encounters otherworldly beings from under the arctic ice. Ian Ross, Lovern Kindzierski, Adam Gorham, and Peter Dawes explore the impact of anthropology on indigenous cultures and the robbery of indigenous artefacts by anthropologists. Richard Van Camp, Rosa Mantla, and Nicholas Burns explore the interaction between the traditions of The Night the Spirits Return among the Dene and the Celtic-originating tradition of Halloween. Todd Houseman and Ben Shannon tell a tale of the future where pollution has destroyed much of the North American continent and a war between humans and robotic life forms has meant widespread devastation. Jay and Joel Odjick examine a first hunt and the interaction between the human and animal world. Elizabeth LaPensee, Claude St. Aubin, and Andy Stanleigh explore the impact of mining and the attempt to connect to the Memegwesiwag, a people who love copper and can only be seen by the pure of heart. These tales weave together in a fabric of intwined words and images, and also a twining of multiple worlds and worldviews.

The art styles vary in “Moonshot” between mixed media art, ink on paper, pencil crayon on paper, watercolours, fractal-influenced digital art, traditional comic panels and frame-breaking violations of the ‘gutter’ space between panels. They use word bubbles, text-free comics, or large swaths of text, illustrating the potential for expressing the idea of ‘story’ through multiplicity. This is a collection as diverse as the indigenous peoples who contributed to it. No longer relegated to the role of sidekicks or villains, the indigenous characters in these comics are able to tell their own tales, rich in complexity and multi-dimensionality.