No Longer Worn Down
A review of Amal El-Mohtar’s”Seasons of Glass and Iron” in The Starlit Wood (ed. Navah Wolfe and Dominik Parisien, Saga, 2016). 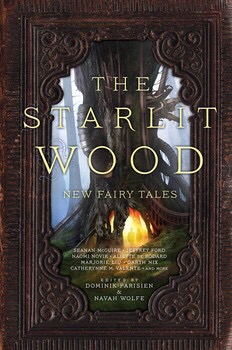 Amal El-Mohtar interweaves two tales of disempowered women, one forced to perpetually walk to save an abusive husband, and one forced to remain perpetually still to avoid being placed under the power of men. Both are trapped -one in movement and one in stillness. In most fairy tales, both are situated as women in distress and need.

“Seasons of Glass and Iron” is a tale exploring the way that men attempt to control women through stories, rhetoric, and actions and the way that women can liberate themselves through collective action, and by creating their own narratives. El-Mohtar brings two disempowered fairy tale heroines together in her “Seasons of Glass and Iron” to illustrate that women are not passive objects to be moved around a man’s chess board, but rather are figures who can shift and change each other, providing support and encouragement to discard the disempowering texts surrounding them.

Tabitha, doomed to perpetually walk in iron shoes, and Amira, doomed to a life of frozen near-death at the top of a mountain have to learn to loosen each other’s bounds, unlatching iron shoes and discarding glass mountains in order to find themselves and change the stories that have been written around them to bind them. It is a release from the spell of patriarchy – one that is presented, all too often, as unbreakable.

“Seasons of Glass and Iron” is a tale of change and self-liberation where women come to recognize their own magic. Frequently women in fairy tales do magical things, but are not considered magical in comparison to other characters. El-Mohtar centralizes women’s magic.

To discover more about Amal El-Mohtar, visit her website at https://amalelmohtar.com/

To find out more about The Starlit Wood, visit http://www.simonandschuster.ca/books/The-Starlit-Wood/Dominik-Parisien/9781481456128

Speculative Fiction is about viewing the world in different ways and imagining new interactions between people. Perhaps this is why so many authors have been attracted to SF as a place for reexamining gendered ideas and gender interactions. In this episode of Speculating Canada on Trent Radio, I note a few powerful Canadian feminist SF authors such as Nalo Hopkinson and Hiromi Goto. In particular, I examine the Canadian contributions to the collection Sisters of the Revolution: A Feminist Speculative Fiction Anthology edited by Jeff and Anne Vandermeer.

This episode explores ideas of reproduction, heterosexism, imbalances in gendered power. This issue explores the power of speculative fiction to disrupt patriarchal assumptions about women’s bodies.

I apply some of Joanna Russ’ ideas from “What Can a Heroine Do? or Why Women Can’t Write” (that explores the possibilities of a feminist Speculative Fiction and examines the feminist potential in speculative fiction) to the analysis of speculative fiction overall, but particularly to the work of Nalo Hopkinson and Hiromi Goto.

A review of Nancy Johnston’s “The Rendez-Vous: The True Story of Jeanetta (Netty) Wilcox” in Bending the Landscape: Science Fiction (The Overlook Press, 1999)
By Derek Newman-Stille

Nancy Johnston’s “The Rendez-Vous: The True Story of Jeanetta (Netty) Wilcox” is a wonderful feminist discourse on the tendency of men to overwrite the narrative and words of women. This is a story about erasure and the abduction of the female voice and the uncertainty of historical or narrative “truth”, particularly highlighting the way that narrative “truths” are often constructed in a gendered landscape.

Coached as a story that is nominally about abduction, Nancy Johnston’s science fiction short story points to the fiction of science and its constructed nature. The story is written as a report about the UFO abduction of Jeanetta (Netty) Wilcox. This report structure to the abduction narrative highlights the way that women’s words are mediated through others. The narrative is constructed as a “truthful” account, requiring the reader to read the obvious markers of assumption in the reporting of events in order to find Jeanetta’s actual narrative and her alternative vision of the occurrences that took place.

Jeanetta’s story is shaped through the perspective of her now ex husband Willard as he attempts to discern why she disappears every night and seems to be lethargic about all of the domestic duties that he thinks she should be conducting happily as his wife. He assumes initially that her concerns may be due to menopause, illustrating his own sexist reading of her body. Later, when he can’t find a method of making her less lethargic and disengaged, he seeks medical support and the doctors, supporting the notion that women should be happy to be relegated by patriarchal control to the domestic sphere, assume that they must be missing a medical problem with her and prescribe mild sedatives… which similarly do not stop her feelings of disengagement.

Never questioning the assumptions of patriarchy, Willard then latches on to the story of a UFO enthusiast that there have been alien visits to the area and tells his wife that she must be regularly getting abducted by aliens and forgetting her own experiences. The male voice here overrides her own and he and other males (doctors, journalists) seek to tell her what she “actually” experiences even over top of her own very direct denial of this. Her own observations are erased by people telling her that she has thrown up blocks to her own subconscious.

Although nominally an alien abduction narrative, “The Rendez-Vous” Johnston’s story is about the tendency of men exercising patriarchal power to override the voices of women and the likelihood that by ignoring women’s experiences and voices, they are going to miss the obvious and construct fallacies that reinforce their own power structures.