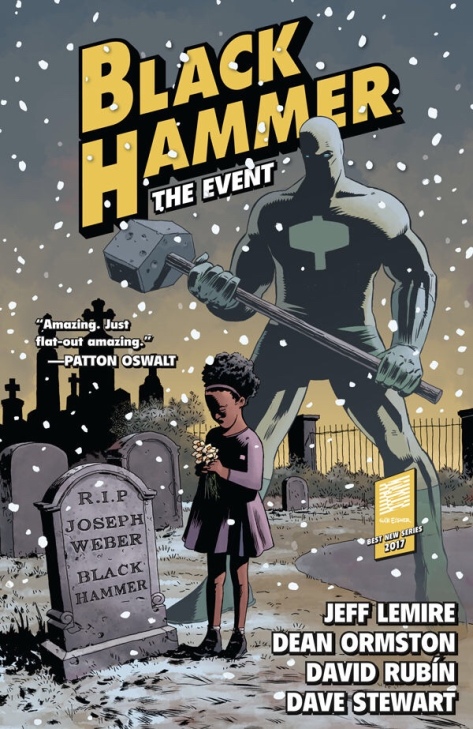 Nothing is quite what it seems in the perfect small town that superheroes Barbalien, Golden Gail, Abraham Slam, Talky Walky, and Colonel Weird, and Madame D have found themselves in. It is a town that is held apart from the rest of the world, surrounded by an energy field… but it is also a town without history, where the history books are blank and everyone seems to just keep repeating the same patterns over and over again.

In Black Hammer Vol. 2: The Event, Jeff Lemire creates a world out of the golden age of superheroes, but he complicates the world, pulling it out of the easy morality of golden age comics and making his superheroes confront realities that they have denied and their own complexities. Barbalien has to deal not only with his disconnect from his home planet Mars, but also with the homophobia that surrounds him and prevents him from being in a relationship with another man. Golden Gail has to face the duality of her identity – young girl when she is in her superhero identity and older woman when she leaves that identity. Here in this village out of time, she finds herself trapped as an eternal child, cut off from her adult identity. Abe (Abraham Slam) faces the opposite experience, flashing back to his experiences as an ageing superhero now considered obsolete and his life in the village where he has created a space of comfort for himself to age away from the superhero scene.Talky Walky, a sentient robotic life form with a taste for adventure has to deal with being trapped in a small space, unable to escape and venture into the wider world. Colonel Weird, a man trapped between worlds, able to see the past and the future, has to confront his knowledge of the future while keeping it secret from those around him. Lucy, the daughter of Black Hammer has found her way into this strange world cut off from her own and lost her memory of the outside world. She has to confront the people she knew before The Event and see how they have changed in this altered world. Meanwhile Madame D tries to maintain this strange bubble of reality and prevent what she fears the most – a supervillain.

Black Hammer Vol 2: The Event is a comic about the effects of battle on the superhero psyche and the damage that it does. It is a tale of repression and avoidance where characters seek to hide from themselves even while they face aspects of their pasts.

Lemire brings attention to classic comic books while adding his own complexities and twists to these worlds, creating uncertain realities and characters who are equally uncertain about exploring them.

To find out more about Black Hammer Vol. 2: The Event, go to https://www.darkhorse.com/Books/26-745/Black-Hammer-Volume-2-The-Event-TPB

To find discover more about Jeff Lemire, go to http://jefflemire.blogspot.ca

Can a superhero retire? Is it the sort of lifestyle that can be surrendered? Michael Johnstone’s “Missing In Action” is a tale of a superhero who is experiencing PTSD (Post-traumatic Stress Disorder) after the murder of his son. He surrendered his position with the League of Canadian Heroes because every day on the job reminds him of his loss and re-traumatizes him. He has sought to keep his identity a secret, hiding from public life, and avoiding people who could recognize him, burying himself in a new civilian identity because he wants to be a normal human being.

But the world isn’t that simple, and the cape and cowl aren’t as easy to give up as it seems. Jason Park can’t stand by and see a girl be abused by her father, especially since he is trying to excuse his abuse of his daughter on the fact that she is “a freak”.

Johnstone brings out aspects of the superhero mythos that are under-represented. He asks what would happen if there were vigilante justice in a world where abuse continues to happen and police rarely do anything to stop it. He reminds the reader that the sort of experiences superheroes have are not ones that can be easily shrugged off and that there would be long term psychological consequences for loss, not a short hate spiral that only lasts the length of one comic issue. Johnstone’s “Missing in Action” is a story about complicating the superhero narrative, and taking it into areas that are less simple than good vs evil.

Reconnecting
A review of Ursula Pflug’s “Washing Lady’s Hair” in Strangers Among Us: Tales of the Underdogs and Outcasts edited by Susan Forest and Lucas K. Law (Laksa Media Groups Inc., 2016).
By Derek Newman-Stille

Ursula Pflug’s “Washing Lady’s Hair” explores a new drug or medication in a future market called Green. Taking the drug is referred to as diving and this is because it generally evokes images of sea life, drawing on the magic of the natural world and sea life. The drug inspires art in some people, but also provides an opportunity to access parts of the subconscious to find new ways to cope with post-traumatic stress. These alternative pharmaceuticals can be a way of healing, but they also contain the danger of potentially creating chronic users who use Green as an escape from reality rather than a method of seeing reality from askance to gain new perspectives on the world.

Green is connected to the exploration of ideas of the natural world, allowing users a space to see the sacred in the world around them and to explore ideas of the environment and environmentalism and Pflug creates a complex interaction between her characters and their drug use. Her characters explore ideas of the romanticism of a pre-industrial society while also levelling critiques about the capitalist control of choices in modernity and the damaging effects of industrialism both on the environment and on human agency.

On a personal level, her character Karen is able to undergo self-healing from the sexual assaults that she experienced at the hands of her mother’s boyfriend and the damage and distance that these assaults created between Karen and her mother. Karen’s use of Green and her artistic expressions allow her to explore the complexity of feelings she has about her mother and the numinous power of Green (its ability to allow for a spiritual connection to nature) allows her to find the protective mother figure she was searching for in the form of a mother goddess.

Like much of Pflug’s writing, “Washing Lady’s Hair” doesn’t provide any simple answers (the issues Pflug explores are far too complex for simple answers), but, rather, evokes questions for readers, asking them to interrogate their own feelings about the relationship between art and therapy, environmentalism and healing. Pflug provides a space for characters to critically question themselves and their choices and to imagine new possibilities. “Washing Lady’s Hair” is a tale of uncertainty and potential and the healing that can come with asking critical questions about the status quo.

To find out more about Strangers Among Us, visit http://laksamedia.com/strangers-among-us-an-anthology-with-a-cause/

To discover more about Ursula Pflug, visit her website at http://www.ursulapflug.ca

By Derek Newman-StilleSet in the future, Brandon Crilly’s “Remembrance” is a venture into the results of war, not on nations, but on one family. Since returning from war, Anna’s father has used an assemblage of assistive technology including a bionic prosthetic leg, but more importantly, a new technology that is purported to help soldiers cope with Post Traumatic Stress Disorder (PTSD). This technology allows a soldier to visit friends lost in war by simulating them in a virtual world.Anna fears that the assistive tech her father is using is causing him to lose touch with reality and become addicted to his technology. She feels him slipping away from her as he engages more and more with his virtual world. She ponders whether the technology is helping or hindering his metal health.It is only when Anna is able to think about her own experience of loss, the trauma that she suffered when her mother died, that she is able to understand her father. This common experience of loss lets her enter into a shared space of longing and constant coping.Crilly provides no easy answers or simple resolutions, but rather shows that trauma and loss are always negotiated, ongoing processes for families to work out.To read more about OnSpec, visit their website athttp://www.onspec.ca/To find out more about the work of Brandon Crilly, visit his website at brandoncrilly@wordpress.com