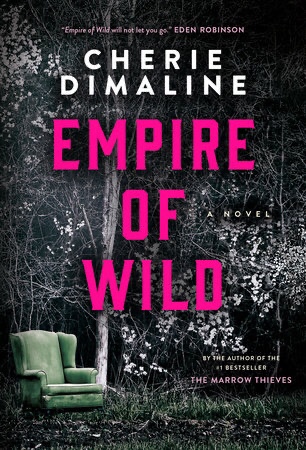 A review of Cherie Dimaline’s Empire of Wild (Random House, 2019)

A fascinating blend of Red Ridinghood, werewolf fiction, Greek myth, and Rogarou legends of Metis people from the Georgian Bay area, Cherie Dimaline’s Empire of Wild weaves together monstrous wolves into a book that is partially horror story and partially a call for social change. Like many werewolf tales, Empire of Wild calls attention to predatory masculinity, and the Rogarou (from Loup Garou, French for werewolf) she creates are transformed into their animal form by transgressions, primarily against women. The Metis people in Dimaline’s tale all grew up with Rogarou lessens and were taught not to wander too far away from the main paths or they would be stalked by the Rogarou, much as Red Ridinghood’s mother tells her.

Joan is a woman who walks her own paths, and even though early in her childhood, she encountered the Rogarou, she still seeks her own way, often telling herself that the stories of her people are just stories. Yet Joan becomes embroiled in a cosmological battle for her land, her husband, and her lifeways. She has to learn from the stories of her elders and partake of their magic in order to keep herself and her family safe from the predators around them.

Cherie Dimaline brings attention to the predatory nature of white men in particular, highlighting the way that white people have predatorily taken Indigenous lands and continue to try to consume more and more. Whiteness is the personification of consumption in Dimaline’s narrative. Her Metis characters seek to buy back land taken from them by white people, constantly fighting against business interests who try to consume more of their land and fill the land with mines and pipelines. She brings attention to the continuing action of businesses to pollute Indigenous territory and displace Indigenous people from their traditional lands. She explores the implications of the church in that theft of land, pointing out that the church seeks to alienate people from the traditional practices of the land in order to pave the way for businesses to buy up land. One of her characters, a miner, tells her protagonist Joan that the church works to control Indigenous people and saying that “the only real threat to a project – to our jobs – are the Indians. They’re the ones with the goddamned rights, I guess. Always protesting and hauling us into church… But when the missions come through? They’re too busy praying to protest. The missions are good at changing the way people see shit…. Mission tents are an important part of mining, of any project really – mining, forestry, pipelines. That’s what’s going up in here next, a pipeline conversation.” Dimaline brings critical attention to current issues around land rights and pipelines, pointing out the continual exploitation of Indigenous peoples. Dimaline points out that colonialism is not only consumptive, it is predatory and the rogarou becomes a symbolic manifestation of this constant territorial violence.

Dimaline uses the image of predation to talk about the loss of selfhood and identity, creating the danger of a wolf that consumes a person from within, consuming everything that makes them who they are and leaving a hollow shell. But, Dimaline also links the rogarou and its predation to missing and murdered Indigenous Women and Girls, pointing out the way that Indigenous women and girls are especially at threat to predatory behaviour, violence, and death. Dimaline, in particular, highlights the predatory and violent nature of toxic masculinity, providing a critique of the way that masculinity is constructed and the violence of the image of the so-called “alpha male”.

Dimaline’s story is an interplay of fairy tale, myth, legend, and Indigenous cosmology, and, like most tales and traditions, it has powerful implications for rethinking and challenging contemporary issues.

To discover more about Cherie Dimaline, go to https://cheriedimaline.com