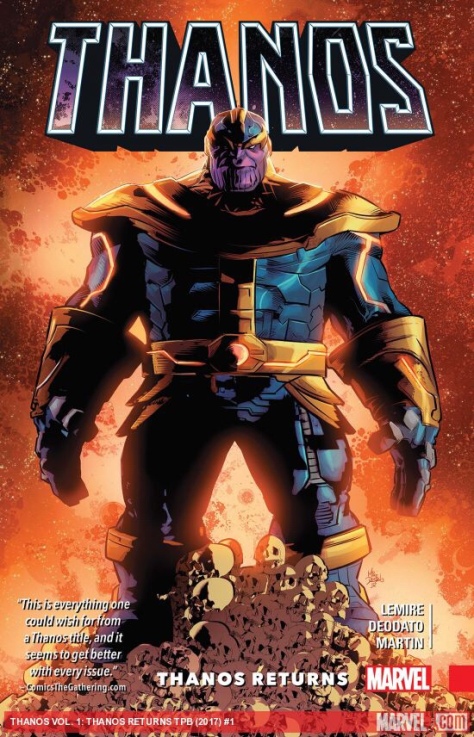 Canadian comic book writer and artist Jeff Lemire has worked on independent comics, but has also worked with the comic company giants DC and Marvel. He tends to take his Canadian interest in grey areas and ambiguous endings into his comics for DC and Marvel, allowing for complex plots and characters.

In Thanos Vol 1: Thanos Returns, Lemire takes on one of the big villains in the Marvel universe, trying to add moral complexity to a character that has often appeared in comics as irreconcilably ‘bad’. Lemire is able to introduce some pathos for Thanos by portraying the villain in illness, creating a ‘god’ obsessed with Death… who is, himself, dying. Thanos is viewed as and views himself as a personification of strength, and Lemire explores what it means for someone who takes so much of his identity from his strength… to suddenly have to deal with vulnerability, with something that he would consider weak in others and would likely kill them for.

But what does the death of a powerful tyrant mean for others? This is a universal race to grab power in the perceived power vacuum that Thanos will leave, and Lemire uses this comic to comment on political power and the discourse of vulnerability on a universal scale. Revenge, the lust for power, and the desire to be significant are all wrapped together in the people who race to fill the perceived void that Thanos will leave. Lemire creates a race between villains to secure their place in a changing universe.

To discover more about Jeff Lemire, go to http://jefflemire.blogspot.com