A Review of Paul Marlowe’s Knights of the Sea(Sybertooth Inc., 2010) 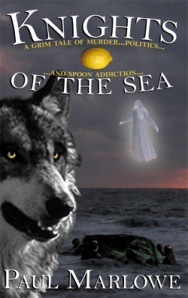 Submarines are the maritime SteamPunk equivalent of the airship.  In his Knights of the Sea, New Brunswick author Paul Marlowe explores Victorian era Nova Scotia through the lens of a quirky cast of characters including several teens that are considered too smart for their age, a Russian sea captain, a part-time cabby / full-time reporter, several specialists in the etheric realm, a cast of spies, a fish-addicted cat, and a silver-spoon addicted werewolf. With this cast of characters, what can you do but put them into a conspiracy involving a prototype submarine, a eugenics-mad group, a sabotaged political bid, smuggling, and assassination? Canadian history has never been so deadly, or so exciting. His fictive account of Canada’s past is infused with humour, the otherworldly, and the message that it is important to question everything.

Marlowe makes the sea come alive as a character in his novel, creating a permanent presence of the salty and the liquid, and making the land and sea a slippery, in-between place where sea, land, and the supernatural mix with the ebb and flow of the tide. The use of a submarine in the plot of the novel brings the theme of submersion ‘to the surface’, illustrating the way youth (and particularly precocious young Victorian girls) often are submersed by the needs and requirements of family and society in general, losing themselves to the tide of what is proper.

Marlowe facilitates the steady interaction between Canada’s past and the fantastic, forging a bond in the reader’s mind that brings figures and places from Canadian history alive and yet gives them the aura of mystery and the magical. Directed at a teen audience, Knights of the Sea encourages a passion for Canadian  history and the desire for the reader to find out more about the events of Canada’s past through the infusion of the mythic.

The theme of heritage is strong in this novel, with characters seeking their own historical roots and some characters even affecting accents and behaviours of their ancestral places of origin. Both Scots and werewolves in this novel search for their roots and seek some understanding of themselves through their own heritage and history, encouraging the reader to similarly look at themselves as part of a tradition rather than strictly modern. The past is present in this novel both with its setting and the passion it inspires for the examination and exploration of the past (and speculations about the hidden parts of the past).

Marlowe’s work is also fundamentally political, challenging readers to reflect on the silencing of children and the general ignoring of insights by young people. Through the insights of youth and the youthful desire to question everything, plots are uncovered and things that adults have ignored are brought under speculation. Knights of the Sea uses eugenic conspiracies to question and critique neo-Darwinian notions of progress and the idea that destruction will naturally lead to more advanced economies and inventions. Readers are encouraged to question a system where social policy is kill-or-be-killed. The SteamPunk Victorian setting of the novel, where invention and progress are at a point of new acceleration, emphasises this need to question the concepts of progress itself and the social underpinnings defining progress as advancement of the few at the expense of the many.

Knights of the Sea is a fusion of the SteamPunk and the mythic, unifying the fantastic, steam-powered inventions of the Victorian era with the Victorian interest in the supernatural and what they called the “etheric”. The Victorian era was a period of interest in the supernatural and, particularly, a passion for discovering the scientific and medical underpinnings of the supernatural: so a supernatural SteamPunk is a brilliant meeting of science and the spiritual.  Even when lost at sea chasing mad inventions, the spiritual world intervenes in this novel in subtle ways, casting its spectral shadow over the scientific rationalism of the characters, and presenting itself as an ever-present question.

One of Marlowe’s protagonists, Elliott is the perfect figure for this exploration with his interest in both the medical sciences and the Etheric Explorer’s Club, and his passion both for rational explanations and equally strong passion for a woman whose werewolfism makes her behaviours at times inexplicable to the non-lycanthropically inclined. The novel opens with a mixture of Victorian voice and the written cadences of classical pulp fiction narration and this intermixing meant that the only words I could think of to describe this fusion were SteaMacabre or SpectrePunk.