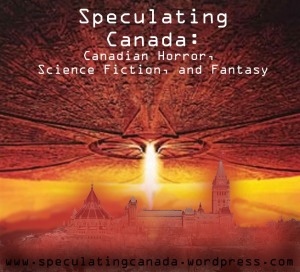 I understand why so many authors want to focus on the “international” quality of their work. Ultimately, they want it to be read outside of their country of origin – they want to have a larger readership. But, this is often only the case for people from countries that have less established histories of SF. The American and UK markets are quite comfortable with calling their work distinctly American or English, setting the story in their own country and flavouring it with local dialect and setting. Canadians are less inclined to do this because they know that overwhelmingly the market is dominated by Anglo-American SF works and they are often told by publishers that their work won’t sell in the United States because Americans won’t read about places other than the United States. I think this is highly unrealistic and assumes an unadventurous quality in a group of people (SF fans) who are obviously quite adventurous – they are willing to imaginatively explore other worlds, new environments, and new and diverse cultures in their literature, certainly they would not be adverse to reading about a country next door.

Canadian identity is a complicated issue, so many people feel that rather than try to think about the Canadianness of their work, it is far easier to assume that Canada is a cultural blank slate that does not have a cultural imprint on the things that occur within it. This does a disservice to Canadian literature, and also ignores the experience of new Canadians (people who have immigrated to Canada), who are often told that Canada is an easy place to adapt to and therefore that they shouldn’t have any difficulty fitting in. When they inevitably do experience difficulties such as racism, exclusion, and even culture shock, they often internalise this experience and, rather than criticising Canada’s lack of inclusivity, will criticise themselves for not fitting in.

It is important to be aware that we do have a regional culture – a culture that is not monolithic, that is changeable, that is often based on questioning itself and asking itself what it is.

Canadian culture is Speculative. We don’t believe we have a culture, so we always ask ourselves what it is. The great part about this is that’s what Speculative Fiction is all about – asking ourselves about ourselves. It is in the mirrored gaze of the alien’s eye or the monster’s saliva that we see the image of ourselves. We create our aliens and our monsters from our own imaginations and they embody our fears, our desires, our thoughts about our place in the world – they tell us about ourselves.

The best thing that we can say about Canadian culture is “it’s complicated” and it is always going to be about living the question, speculating. – and that is okay, in fact, it makes it interesting. As SF fans, we should be okay with living with ‘the question’. We do it every time we read our favorite books.

4 thoughts on “Editorial – Is There Actually Something Canadian About Canadian SF?”