A review of Orrin Grey’s “Persistence of Vision” in Fractured: Tales of the Canadian Post Apocalypse (Exile Editions, 2014)
By Derek Newman-Stille 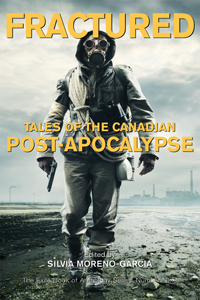 Shaped by movie imagery with comparisons of the events of the story to a Hollywood film, Orrin Grey’s Persistence of Vision uses the unreality of film to contribute to the notion of an apocalypse that no one believes in. The notion of the end is difficult for anyone to conceive of, but Grey’s characters are especially confused because their end comes from the spectral presences of the past. People begin dying under odd inexplicable circumstances – pursued by shadows, picked up by spectral hands, scared to death.

After a scientific experiment with an old computer that was discovered beneath an asylum, the undead return to the earth… but not the expected undead that we have seen in post-apocalyptic survival film after survival film… instead Grey brings us a return not of the body but of the essence, a return of ghosts to the mortal realm. The world becomes crowded with the haunted presences of our past, the dead returned to wreck spectral violence on the living.

Grey creates an undead apocalypse far more frightening than the zombie apocalypse because these undead beings aren’t corporeal, their bodies can’t be destroyed. They are lingering presences that demand our attention by bringing us into their world.

Rather than a story of triumphant survivors challenging the odds and making a new world, Grey asks readers what sort of person would want to live in a post-apocalyptic world, particularly one where all one can do is hide, wait, and just survive. Although ghosts have returned from the otherworld, it is the living human population who are in limbo. They are the ones who wait in a meaningless stretch of time.

To find out more about the work of Orrin Grey, visit http://orringrey.com/

To find out more about Fractured: Tales of the Canadian Post Apocalypse, visit Exile Editions’ website at http://www.exileeditions.com/