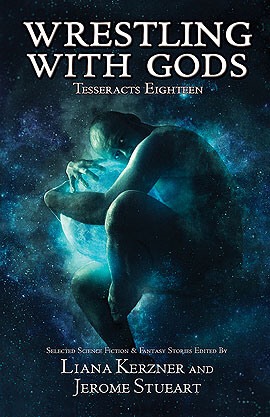 A review of Alyxandra Harvey’s “The Faith Circus” in Tesseracts Eighteen: Wrestling with Gods (Edge, 2015).

In “The Faith Circus” by Alyxandra Harvey explores ideas of religious conflict and the development of a multi-faith, multicultural system. When the Raja was young, he had demanded that various priests and magicians heal his family from illness. When none of their practices worked, he created the faith circus, a battleground within which various practitioners try to show that their god is the most powerful by killing other religious practitioners. The Raja, stuck in a mode of perpetual anger at what he believes is a betrayal by all of the various gods, brings this assortment together for his own amusement and uses the power shed by the murder of practitioners to give him further magical power and to power the shields that prevent the combatants from leaving the combat grounds.

When a dancer arrives in the arena with a skirt of coins, she questions the need to fight to prove the effectiveness of one’s deity. She shifts the nature of the combat by pointing out the collective power of bringing so many gods and so many faiths together and invites people to look at their commonalities rather than their differences. She looks at the connection that can exist through the blood that has been shed in the arena, the power of sacrifice to bind people together rather than the power of bloodlust to pull them apart.
Harvey subverts the expectation of conquest that underlays most tales of arena combat. She invites readers to look at the potential for collective action rather than individual predominance and conquest over others. She explores the potential of a diversity of faiths as a place of connection between people, a shared experience rather than seeing religious diversity and pluralism as a threat.
To discover more about Tesseracts Eighteen: Wrestling with Gods, visit Edge’s website at http://www.edgewebsite.com/books/tess18/t18-catalog.html

To discover more about Alyxandra Harvey, visit her website at http://alyxandraharvey.com