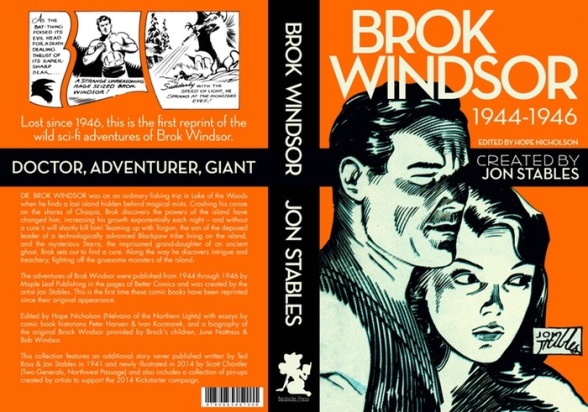 What sort of vehicle would a Canadian superhero adventurer from the mid 1940s travel in? That’s right, of course it is a canoe. Comic book superhero Brok Windsor was a creation of Jon Stables, writing under the pseudonym Jon St. Ables. The Brok Windsor comics, like most golden age Canadian comics, were produced during the years around world war II when Canadian rationing laws meant that American comics were no longer being shipped to Canada. Stables and his contemporaries were able to create their own Canadian superheroes and rewrite the Canadian landscape as a place of adventure. The Brok Windsor comics ran from 1944-1946 and was produced by Maple Leaf Publications. Hope Nicholson has now resurrected this historical comic and published it as a collection through Bedside Press.
But where is a Canadian adventurer like Brok Windsor to find adventure in this Canadian landscape?… well, don’t forget that Canada is huge, and, of course, most of the country is largely unexplored, so when Windsor is fishing in his canoe and sees strange mists on a large lake named “The Lake of the Woods”, of course he needs to investigate. Through the misty barrier, Windsor finds himself in a new realm of islands, and, as we know, islands are always places of mystery and adventure.

Jon Stables’ Brok Windsor comics were about the immensity of the Canadian landscape and its ability to be both familiar and strange, a place that can be opened to adventure and whose magical quality is only a thin wall of mists away. Windsor’s body itself is shaped by his landscape and when he crosses through the mists he becomes immense in size, his body emulating the bodies of the giants who occupy these islands of adventure, and, even when his body is returned to its normal size, the intrinsic difference is still written on his body, providing him with the immensity of strength that his giant body possessed… just in the form of a smaller, more Canadian shape.

The oddity and magical quality of this different landscape hidden within Canada’s hugeness is expressed throughout the comics. Even seemingly familiar aspects of the landscape are alive with oddity. When Brok first encounters trees in this landscape, rather than providing a sense of familiarity, they add to the oddity of the landscape. Rather than stationary figures of the landscape, these trees are active and potentially consumptive, reaching out with branched fingers to consume flesh. Through this device Stables illustrates the oddity of the landscape and the notion that the expectations of Canadian geography are about to be disrupted. Brok Windsor encounters new civilizations, alien lifeforms who are able to detach their heads from their bodies, possessing spirits, gigantic bird-bats, horned lions, insectile people who are horrified by water, magnetically powered flying cars, and an indigenous civilization that has become giant and have developed space-age technology.

Windsor’s companion in this strange world is one of the giant indigenous men that he has encountered, Torgon, who serves as a translator for the adventurer as well as a co-explorer in a realm of new possibilities.

Stables’ art evokes the mystical quality of the Canadian landscape, the power of sky, lake, and treescape that were frequently evoked by Canadians trying to find a sense of identity in the war years and served as a shorthand for belonging. The power of Stables’ art is such that it is able to evoke both these familiar shorthands for Canadian geographical ideas of belonging and also estrange these icons of belonging by creating a strange landscape within the expectedly familiar place.