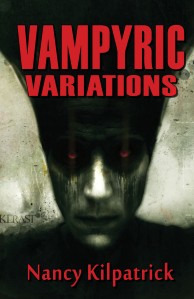 Although set in a psychiatric facility and featuring a Romanian protagonist, Nancy Kilpatrick’s short story The Vechi Barbat is fundamentally a very Canadian tale containing traditional Can Lit themes. Her story is about the struggle between tradition and modernity, the tug that the traditions of the past have on a person while they seek out the desired spaces of the future. Kilpatrick’s narrator, Nita, is a woman from a small Romanian village who has been told that her destiny is to look after the village old man, the Vechi Barbat, who is trapped in a cage, doesn’t age, and needs blood to survive. She wants to go to university and study anthropology, to move away from her village that is mostly populated by the elderly (most of the young have moved away to pursue futures elsewhere).

Nita sees her village as trapped, stuck with outmoded ideas and mired in the past. She seeks to educate her village on the new ideas and thoughts she has adopted while abroad, to teach them that their mythology of the Vechi Barbat cannot possibly be true, but tradition retains its hold on her, showing her that no one can totally escape from family and their past. This is the classic Canadian theme of the desire to get away from family obligations to create a new life and the essential and irresistible draw of the past, of home, and of tradition. Like many protagonists in Can Lit, Nita finds that she can’t escape from home, but is rather torn between tradition and new ideologies – suspended in an uncontrolled present that is a tear in the timeline between future and past.

Kilpatrick’s tale is set in a psychiatric institution, the perfect space for someone torn between future and past, disrupted and disturbed. Like the Vechi Barbat, she is confined, trapped, and the psychiatric hospital is strangely reminiscent of the vampire himself – cold, white, sterile, and fundamentally dead. She is controlled by medication, where he was controlled by starvation and, although she didn’t feel the bite of the vampire’s teeth themselves, she feels their bite by proxy through the needles injected into her body that erase reality in their attempts to subdue and control her mind.

The psychiatric institution is a place of control, a place where tradition is denied and where the only reality that can be constructed is one of medical modernity, where the doctor desires absolute hegemony and nothing can interfere with her world. The medical profession is fundamentally about power and has no place for any power that it cannot explain.

The skill of Kilpatrick’s prose in this story can be seen by her ability to alternate between the descriptive sterility of the hospital and the colourful livelihood attributed to the Romanian village that Nita comes from – the rich mythological stories full of dark gods and betrayed love and the richness of the colours of the mountains themselves (though the predominant colour is the blood red that seems to infuse every aspect of this traditional landscape).

Kilpatrick’s love of intelligent, conflicted characters can be seen in the construction of Nita, a woman who is fundamentally brighter than the medical doctors and psychiatrists who seek to control and limit her. She is infused with a darkness, a burning guilt that the medical profession, with its cold logic and inability to see past its own viewpoint, cannot approach. Kilpatrick reminds her readers that an open mind is needed when approaching every issue and that limiting oneself to one’s own perspective only denies the depth and reality of a situation.

While reading The Vechi Barbat, the reader can feel the white, dead walls of the institution closing in on him or her, suffocating any creativity and anything the medical profession cannot control. The reader shares in Nita’s frustrated helplessness, denied voice and power until Kilpatrick releases them at the end of her story, with a reminder that the only escape from psychiatric control may be the danse macabre with death himself.

Nancy Kilpatrick’s short story collection Vampyric Variations (in which you can find The Vechi Barbat) will be released in October 2012 by Edge. To read more about it, go to http://www.edgewebsite.com/books/vampyricvariations/vv-catalog.html . To read more about Nancy Kilpatrick, explore her website at http://www.sff.net/people/nancyk/  and enjoy my interview of Ms. Kilpatrick later this week on Speculating Canada.