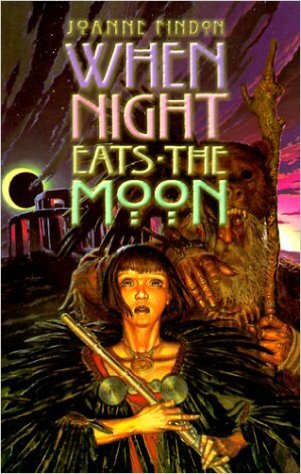 Time travel is ultimately about responsibility – responsibility to the timeline, to the past, the present, and the future. Perhaps this is why it works so well for a Young Adult novel. In When Night Eats The Moon, Joanne Findon’s narrator, Holly, begins her voyage through time by idealising the past. She sees the past as an idealised place, separate from the issues of modernity and she wants to escape her personal circumstances (the tension between her parents and the shroud of secrets they have woven around her life) to find a reality that resonates with her desires. She has to cope with the clashing of fantasy and reality and the uncertain barrier between them. Rather than her fantasies being eclipsed by reality as occurs in so many coming-of-age narratives, Holly’s reality is expanded by the incorporation of the fantastic into her life and her fantasies are augmented by the infusion of the need for thinking about the real world impact of imagining.

Holly is placed on the edge of family secrets and forbidden knowledge beyond her understanding. Holly discovers a group of vessels filled with time that are able to transport her to the ancient past, letting her meet the builders of Stonehenge. During her voyage, she meets Evaken, a boy who has also discovered forbidden secrets in a Magician’s Apprentice narrative where he takes on magic for which he doesn’t yet have the wisdom to understand. This collision of times and secrets produces a space of healing, an integration of separate narratives, of stories divided by space and time. Holly is able to gain perspective on her own life when she encounters the violent collision of people in the past and is able to bring a perspective from the future to people in the past who need new tales to give them context on their complex world.