A review of Julie Czerneda’s A Turn of Light (Daw, 2013).
By Derek Newman-Stille

Cover Art for A Turn of Light by Matt Stawicki

Julie Czerneda’s A Turn of Light is a transformative text on multiple levels. It is about Jenn Nalynn, a girl on the cusp of womanhood who is confronted with her own changing nature and the need to understand her own place and what has shaped her into who she is. Not only is her situation changing, but her understanding of herself has shifted and she is left with questions about where she has come from and what has shaped her, and what she is becoming. She is coming to realise that her world is shaped in secrets, things kept from her, and truths that are buried seemingly for her own protection. But, innocence can be dangerous, secrets can cause pain, and not-knowing often means actions taken in ignorance that can be harmful because they lack an understanding of the context in which they occur.

Jenn is in a place of magic, Marrowdell, a place that she has grown up with and seen as normal because it is the world that has shaped who she is. But, it is a place where people eat toad eggs, where toads guard houses, where trees move of their own volition, where water appears when needed, and where dragons play in the meadows invisible in the light but revealed in their majesty as the world turns to twilight. Only through a stranger’s eyes, by hearing about what wonders surround him, does Jenn see that the place she lives in is not “normal”, that it is wondrous. As a truth-seer, Bannan sees more than others – he sees that roads run as silver, that the house toads wear armour, that moths are able to write down what they observe. He sees what Jenn is incapable of seeing, notices what she doesn’t notice.

Jenn is met with the need to understand herself and her place in her world better, to see truths that have been hidden from her for her own protection. She is changing, and with those changes, she grows in connection to her home of Marrowdell (a place which she cannot leave without death to herself and the landscape) and also in her own magical ability. Yet, without being taught about her magic, with it constantly being buried and kept secret from her, she acts out of ignorance, causes damage to the people, places, and things around her. Cushioned in a world that doesn’t want her to experience hurt, she hurts others by accident. When power and ignorance are paired, damage is bound to happen.

Jenn, desiring companionship, transforms her childhood friend, Wisp, a creature who plays with magic, invisible, and ever-present, into a human being. He loses his dragon nature, trapped within a man’s shape and limited by it. He becomes something different, changed against his will by Jenn’s wish. Wisp has become Wyll, a stranger to Marrowdell, and a source of interest and fascination to a village that is accustomed to knowing everyone. He questions things, challenges ideas that are entrenched, and provides a foil for human actions, showing that what is assumed to be natural is only natural for human beings. 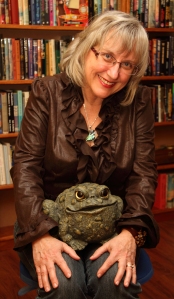 Czerneda creates a world in which everything and everyone is in flux, challenging and questioning themselves and the nature of the world around them while trying to uncover mysteries that have been left hidden in the desire to protect secrets. She reveals that worlds are always steeped in the mysterious and that everyone is always searching for their place in the world while only knowing a fraction of it, of themselves, and of those around them. There is a danger in ignorance, and a need to learn and reveal even painful truths to others to prevent harm.