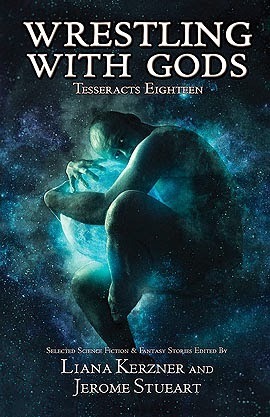 A review of Derwin Mak’s “Mecha-Jesus” in Tesseracts Eighteen: Wrestling with the Gods (Edge, 2014)
By Derek Newman-Stille

Religion (particularly when represented in fantasy) is generally constructed as something that is bounded, something that has clear boundaries and belongs to one specific group who all believe the same thing. Derwin Mak’s “Mecha Jesus” blends categories, blending religious systems and getting away from the idea that a religious figure can be exclusively the property of one group. Mak sets his story in a Shinto temple of the future, but one in which Jesus is one of the Kami. The Kami are the spirits and gods of Japanese Shintoism, but the Kami are considered boundless and can encompass any entity that is a force of creation and has influence on our world. It is therefore understandable that Jesus, a figure from Christian belief, could be adopted into Shintoism one of the Kami.

It is always challenging to explore real-world religions in speculative fiction, but Mak shows an ability to question the boundaries of religion and explore universal human themes like the quest for the ‘truth’ (and the eventual discovery that ‘truth’ is subjective), battling against discrimination and oppression, the realisation that the universe is infinitely more complex than we can imagine, and the magic of self-discovery. Mak recognizes a similarity in aspects of Shintoism and Christianity such as the idea that a man can also be a god or have something divine in him and the connection between the Catholic notion of a relic, an object that relates to a particular saint that still holds some of their power and the Shinto notion that an object that belonged to or contains part of a Kami can still hold its power.

“Mecha Jesus” features a Shinto temple devoted to Jesus as one of the Kami and the principle characters in this short story are a Japanese Catholic priest who understands both the Christian context of Jesus and the Japanese cultural context of Shintoism, a fundamentalist Christian who spends most of the time at the temple trying to convince Shinto practitioners that they are worshiping Jesus wrong, and, of course, mecha Jesus himself – a robot who has taken from the principles of Shintoism that any object that holds a relic can become a shrine, making mecha Jesus himself a walking, operating shrine that holds the power of Jesus inside of it. And houses his spirit.

As much as this is a story about recognising the interconnections between religions and the need to see beyond the isolating potential of religion, it is also a story about discrimination and facing social oppression. In the future that Derwin Mak creates, groups are destroying robots, considering them to be a threat to human employability and an abomination. These hate groups attack robots and those who protect them because they believe they are working for humanity. These groups, seeing robots as soulless face a critical moment when they come into contact with a robot who seems to have a soul and a group of people who are willing to defend him from persecution.

To discover more about the work of Derwin Mak, visit his website at http://www.derwinmaksf.com/