A review of Nalo Hopkinson’s Sister Mine (Grand Central Publishing, 2013)
By Derek Newman-Stille 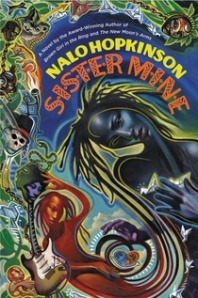 There is a beauty in complexity, an ethereal quality to the display of Otherness and the richness of diversity. Sister Mine evokes the complexity of reality, the beatuty and power evoked by the richness of the human experience. Nalo Hopkinson’s characters are diverse in cultural background, ability, and engagement with the body, as well as multifaceted in their engagement with the magical, the mythical, and the otherworldly.

Sister Mine is rich with characters who often are cast to the fringes, to the Other Worlds within our world, and it is appropriate that she sees these characters as full of potential, as full of the Otherworld, the complexly spiritual. Conjoined twins, people with mobility disabilities, characters of diverse ages, sexualities, psychologies, economic backgrounds, and ethnicities are pulled into the novel in unique ways as she gives voice to those who are often rendered voiceless in a society that is focused on normativity and de-voicing those who don’t fit into its narrow definition of normalcy. Hopkinson evokes the complex engagement between identity and the body, diverse ways of knowing ourselves and how we relate to our physicality – our world and the physical parameters of our bodies.

Makeda, born a conjoined twin with her sister Abby, the “crippled deity half breed” of a human and a celestial deity that is evocative of the vodoun Loa, has always craved the mojo that her sister possesses. Undergoing surgery to separate their bodies, Abby ended up with something that Makeda felt she lacked, a certain spiritual power and ability to render her power into the world in the form of her singing voice. Makeda is called the “donkey” of the relationship by her celestial family, seemingly without any power that would render her other than human. She feels herself incomplete, less than her sister and merely a vessel that carried her sister who others seem to view as superior to herself. Physically separated, she feels tied to her sister intimately, unable to find herself and her identity as something different from her family (a place that she feels has been made clear to her by her family’s rejection of her). She leaves her sister’s house in an attempt to make her way in the human “claypicken” world, as one of them since she feels that she has more in common with a humanity without mojo than with celestials whose mojo can at times make her feel disoriented and woozy.

Yet, even among a humanity that she feels she can relate to bodily, there is still distance. She is still the child of a father who is a deity (though transformed by his fellow deities into a human being that now is experiencing Alzheimer’s) and a mother who was transformed into a sea monster and has been distanced from her from birth… and she still receives regular visits from an uncle who is death personified and a family of deities that feel that they can interfere with her life because she is family and less than them because she doesn’t have any of the mojo of a celestial. Out of place everywhere she goes, Makeda is able to see more than others, notice things that others would disengage with in their attempt to render things ‘normal’ according to their own status quo and predictable patterns of behaviour. She is a body seeking identity and discovering that nothing about identity is certain or fixed, but rather exists in a flux and flow of changeability that doesn’t entirely relate to her bodily ontology. She is caught in a system where others feel that they can change things for the good of those whom they believe are less than themselves, and sees that intentions based in superiority are often built on shaky ground.

To discover more about the work of Nalo Hopkinson, visit her website at http://nalohopkinson.com/ .