Do Emperors Dream of Electronic Nightingales?
A review of Michelle West’s ‘The Nightingale’ in Once Upon a Galaxy Edited by Wil McCarthy, Martin H. Greenberg, and John Helfers (Daw, 2002).
By Derek Newman-Stille 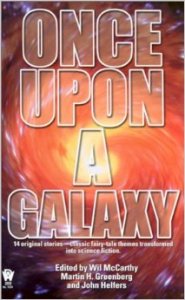 Michelle Sagara West (here writing as Michelle West) takes Hans Christian Andersen’s “The Nightingale” from once upon a time into the (un)Happily Ever After, transforming myth into science fiction. Andersen’s tale is one of nature versus artificiality, pitting the natural songs of a living nightingale against the regularity of a clockwork nightingale. Both are able to produce music, but the variety and passion of the biological Nightingale surpasses that of the artificial.

Michelle Sagara West plays with this contrast between the natural and artificial by setting her tale In the future. West introduces the nightingale to the audience first, narrating from her perspective. She is constructed entirely as an object of the Emperor, an extension of his power and a symbol of his absolute control. She lives for the Emperor, uncertain even of her own selfhood.

West plays with the Orientalism of Andersen – his portrayal of China as autocratic, distant, wealthy, and violent – by instead situating her Emperor in a galactic setting, a setting that can comment on Andersen’s racism while also allowing her tale to play with themes of autocracy, wealth, and violence without replicating Andersen’s racism. The Emperor in West’s tale has literally distanced himself from human experience by altering his body, becoming something distant and quasi-mechanical. His obsession with music arises from the power that music has to make him feel some tinge of his humanity. This is an Emperor who desires control over all things, so the power music has to present diversity, uncertainty, and fluctuation has been regulated in the form of his android songbird who has been imbued with all of the galaxy’s latest musical trends without the chaotic uncertainty of music.

West’s songbird, just like Andersen’s nightingale, submits to the Emperor, making herself an object of his pleasure and desire and an extension of his will. She is caged just as Andersen’s nightingale is, but West’s songbird is a combination of images of escape and reminders of captivity. She is trapped in a castle on a planet where flight is forbidden and, moreover, she is given wings, but forbidden to ever use them. Creating them as a symbolic reminder of her captivity. She is forbidden contact with anyone other than the Emperor, secreting a poison that is fatal to anyone but him and is programmed to only love him.

Yet, unlike the mechanical nightingale from Andersen’s tale, West’s songbird is able to hear and experience the music of a human singer, hearing her voice and opening herself to learning from this singer and therefore experiencing the intwined nature of emotion and song, the human ability to express feeling through voice. In order to learn this interweaving of song and feeling, West’s songbird has to find something inside of herself that is fundamentally foreign to her.

West plays with ideas of permanence versus ageing and mortality. West contrasts the rigidity and stagnancy that comes with permanence against the changeability that comes with mortality, allowing her artificial songbird to be emotionally awakened by a love that is born through music. West illustrates that myth or fairy tale, like song, is an expression of human mortality and is a flexible and open to fluctuations as song, allowing The Nightingale to drift from a mid 1800s tale to a tale of futurity and speculative fiction.

You can discover more about Michelle Sagara West at http://michellesagara.com

One thought on “Do Emperors Dream of Electronic Nightingales?”