As a queer man, do you know what I want to see:

a sci fi novel in which one of the typical space bros says “yo fags, no homo” and instantly has his head bitten off by a glitter-wearing, feather boa carrying alien, who instantly spits it out and says “No hate, bro”;

a fantasy novel in which the evil queen finally gets her princess love;

a white knight who realises that the black knight keeps kidnapping princesses to get his attention;

OR a sparkly vampire… oh wait, that’s been done before… and with a straight vampire at that.

There is an under representation of queer people in genre fiction, but this episode of Speculating Canada on Trent Radio explores Canadian queer, LGBTQ2 or QUILTBAG (Q – Queer and Questioning, U – Unidentified, I – Intersex, L – Lesbian, T – Transgender, Transexual, Two-Spirited, B – Bisexual, A – Asexual, G – Gay, Genderqueer) fiction.

This audio file was originally broadcast on Trent Radio, and I would like to thank Trent Radio for their continued support.

A review of Gemma Files’ A Book of Tongues Book 1 in the Hexslinger Series (ChiZine Publications, 2010). 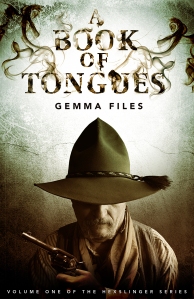 Cover Photo for A Book of Tongues courtesy of the publisher

I have often shied away from the Western genre, seeing it as generally overly heterosexist and enforcing a restricting notion of masculinity, but I was intrigued when I saw that Gemma Files, who often writes pro-queer literature was writing a Weird Western series. Okay I thought to myself, Cowboys might be interesting if they use magic. A Book of Tongues was a beautiful subversion of a generally over-masculinist genre – infusing the Wild West with the weird and the queer.

Files creates two queer protagonists, and unlike a lot of authors who tend to de-masculinise queer characters, Gemma Files makes certain that they are both extremely masculine and also queer-oriented. Her complication of the queer character is made even more fantastic with the introduction of a preacher who is in a relationship with a man. His form of magic is to use bible quotes to empower his magic, which is a brilliant way of empowering queerness by turning bible quotes, which have often been used by intolerant and hateful people as a justification for them disempowering and oppressing queer people.

By situating her novel at a particularly homophobic period of history, Gemma Files makes her character’s challenges even more prevalent. They have to fight a widespread social and religious intolerance of their same-sex relationship as well as facing discrimination and fear for their ability to use magic or hex. The two forms of discrimination intersect in such a way that the only escape from widespread intolerance and the likelihood of death is to use hex craft in an aggressive way. Her characters have to enter a morally ambiguous area – willing to kill in order to preserve their rights to exist. In this way, Files further plays with the Western genre, which often has very easily distinguishable white-hats and black-hats – her characters are morally grey, and may prefer the colour purple.

Upon reading A Book of Tongues one wonders why more authors haven’t used queer characters in the Western genre. The social oppression and fear of homosexuality means that the cowboy characters need to be even more ‘outlaw’-like in nature and when society’s rules prevent your existence itself, the notion of a character who refuses to live by society’s rules makes even more sense. They have to defy social rules just to exist and survive, so it is understandable that these characters would develop a general disdain about social rules and a desire to be their own man.

Gemma Files uses a poetic, mythic language that conveys a beauty in darkness and a darkness in beauty. Like her descriptive style, her characters are painted as both beautiful and deadly. Her devilish desperados are complex characters that are forced into even more complexity for the love that they feel and the social restrictions that surround them.

In a world where hexes have the power to destroy a whole town in the blink of an eye, Chess and Reverend Rook are feared as much for their homosexuality as they are for their ability to wield the destructive power of magic.

To find out more about Gemma Files, visit her website at https://sites.google.com/site/thegemmafiles/ and her blog at http://musicatmidnight-gfiles.blogspot.ca/ .  To find A Book of Tongues and others like it, visit ChiZine’s website at http://chizinepub.com/ .