In “Let Slip the Sluicegates of War, Hydro-Girl”, Terri Favro creates a technologically advanced steampunk Canada in the midst of the war of 1812, using the hydro-electric dam at Niagara Falls as a barrier to American invasion. Favro’s tale follows the life of Laura Secord-inspired character as she navigates the complexities of life on the margins. Setting her narrative on the edge of the Canadian border with the United States, Favro’s tale is edgy for more than its geographical setting. Favro brings attention to populations that are generally pushed to the fringes of our own society. Laura is reinvented as a sex worker whose live has been devoted to providing pleasure to the men who work on the Hydroelectric dam. Laura is chosen for her role as a sex worker because of the geography of her birth, growing up in a racialised neighbourhood with people from groups that are considered disposable.

Laura is able to distinguish herself by her use of fingerspelling, which allows her to communicate with the workers on the dam, many of whom have become deaf due to the loud sound experienced at the turbines and when drilling. Because of the huge amount of the population that are employed in working in the dam in Favro’s reimagined Niagara, a large amount of the population is deaf and have developed fingerspelling to communicate with each other. Despite the fact that they do not use formal sign language, this community has adapted fingerspelling into a form of text speak, using abbreviations for common phrases. This idea of a sign language developing from a large deaf population mirrors the origins of ASL (American Sign Language), which partially developed from the large population of deaf people on the island of Martha’s Vineyard, where a sign language developed to allow for the communication between members of the deaf population and was used by the hearing population.

Like sign language, the fingerspelling of the workmen is largely ignored by the hearing community and is dismissed by the officer Laura reports to as “a language for girls and idiots” (214). Also similar to the treatment of the deaf population by the hearing population, sign language is only adopted by the hearing community when it is seen as having a use for them. Laura’s fingerspelling is observed by a military officer who sees the potential use of her signing for military applications, using the fingerspelling created by this community as a means for covert message transmission. Favro explores the complexity of language as both a facilitator of communication (and thus something that has the capacity to bring understanding) and as a tool of exploitation (only acknowledged as significance when it has value for the dominant population). Laura’s sign language gives her the ability to escape from the exploitative sex work she was forced to experience (which involved physical abuse and non-consensual sex) and was able to find new possible roles for herself.

Favro’s narrative explores the links between bodies, communication, exploitation, and geography, examining the complex networks of identity that shape existence. In addition to her exploration of underrepresented racial and linguistic populations, Favro examines a diversity of sexual identities, exploring lesbian and trans identities in a genre that tends to erase queerness. This is a boundary tale, and one that is able to draw in the complexities that thrive in those borderlands where everything is in flux and where explorations begin.

You can discover more about Terri Favro’s work at http://terrifavro.ca/ . 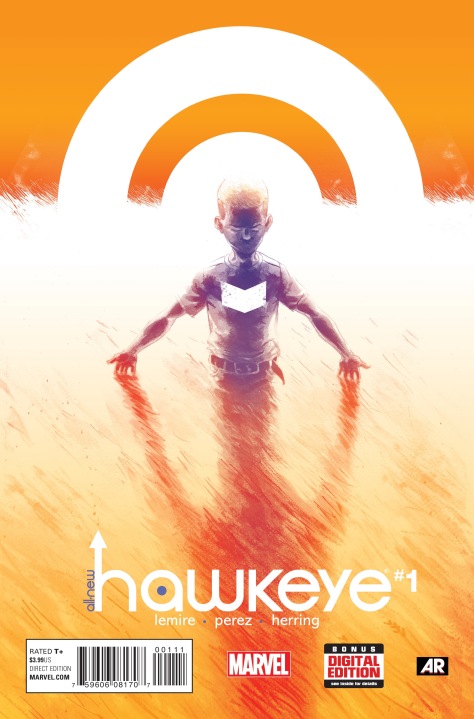 As a disability scholar and a fan of Jeff Lemire’s work, I was extremely excited to discover that Lemire had taken on the writing of the Hawkeye comics. Hawkeye has been recently reinvented as a deaf character (I use the small “d” deaf here because Hawkeye doesn’t engage with many aspects of Deaf culture). Rather than using sign language, this Hawkeye uses a powerful hearing aid created by Tony Stark (Iron Man) that allows him to hear. Fortunately, at various points in the comic, Lemire has Hawkeye lose the use of his hearing aid to illustrate his deafness. Hawkeye’s deafness is rendered in Ramon Parez’ illustrations by showing empty speech bubbles, having the reader take the role of Hawkeye in trying to discern what is being said. This is an effective way of conveying Hawkeye’s deafness since the static form of comics doesn’t allow for the movement of lips. Further, the choice not to make Hawkeye capable of reading lips in the midst of battle is an effective one since lip reading is largely not effective when bodies are static let alone during the movement of battle.

Lemire covers the early life of Hawkeye, illustrating when the character becomes deaf through the abuse of his father. This narrative links Hawkeye’s deafness to his early life and represents the intersection of two bodily identity narratives – the abused person and the deaf person. Lemire resists the temptation of making Deafness into a symbolic medium that many able-bodied authors fall into. Instead, Lemire presents deafness as a bodily experience and one that is only part of the multiplicity of experiences and identities Hawkeye experiences.

Lemire avoids the narrative of the “supercrip”, where a character with a disability is given superpowers to compensate for his or her disability (like Daredevil). Instead, Hawkeye has gained his skills through practise and doesn’t have any additional superpowers. The focus on vision for Hawkeye is significant since deafness normally means a focus on vision as the medium of communication and interaction. Indeed, the deaf community has been referred to as the “people of the eye”. The link between vision and Hawkeye’s name, indicating both accuracy, but also a precision of vision makes a firm link between his deafness and his focus on developing his visual skills.

In addition to exploring Hawkeye’s deafness, Lemire explores the character’s role as a mentor and the complicated relationship between mentor and mentee, bringing attention to the role of aging that is generally elided in superhero narratives. Hawkeye is shown preparing the next generation of heroes for the future of the role.
Lemire’s reference to Hawkeye’s history as a circus performer brings attention to the way that Deaf and disabled people have been involved in the circus industry, finding a place of belonging amongst other people who have been socially discriminated against. This role in the circus plays with the notion of the circus community and the disabled person as both being figures who are stared at in a society that constructs difference as pathological. Lemire examines the way that this intersection shaped Hawkeye’s experiences, propelling him to develop his skills in circus performance (particularly his role as a bowman) that eventually will lead to his role as a superhero.

Lemire’s Hawkeye is represented as fundamentally shaped by his history of experiences, illustrated to be a composite of his past and his present understanding of his role as a superhero.

To discover more about Jeff Lemire’s work, visit his website at http://jefflemire.wix.com/jefflemire.