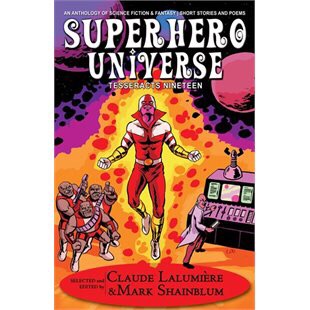 In “The Island Way”, Mary Pletsch and Dylan Blacquiere use the superhero format to explore island culture and the interactions between PEI and mainland Canada. The Federal Government creates a new group of superheroes that are meant to embody Canadianness, having representatives from each of Canada’s provinces as a way of illustrating diversity. Quickly, the government discovers that only showcasing geographical diversity is a problem and realises that they need to include aboriginal superheroes and people from other under-represented groups.This superhero group, as many governmental diversity initiatives tend to be, ends up being largely superFICIAL, only portraying diversity without having substance. The superheroes selected for each region tend to embody regional stereotypes, embodying ideas about a province that the rest of Canada tends to project onto them.

Price Edward Island is treated as many islands who neighbour mainlands are. PEI has all of the decisions about their superhero made by the mainland governments and projected onto the island. The government ignores any viable Islanders and instead decides to relocate a superhero to live part time on PEI in order to fulfill the requirement of regional diversity. They choose a candidate, that, not surprisingly, has a look of Anne of Green Gables about her and therefore continue to create marketable superheroes rather than effective ones.

Pletsch and Blacquiere play with ideas of tokenistic inclusion, control from a mainland government, and the idea that many Prince Edward Islanders have that one is either a true Islander who has lived in the are their whole life (and come from Island stock) or that they are a “come from away” who will never really belong or fit in. The government in their world uses a transplanted superhero while ignoring the work of the protagonist of the story, Maggie, a woman who has to survive by working in a restaurant and spends her time saving the Island by piloting a ghost ship that keeps islanders safe. By being under-represented and out of the spotlight, Maggie has to examine her relationship to ideas of glory and the representation of government ideals versus the notion of supporting a local community and keeping her neighbours safe.