Home is Where the Chicken Legs Are
A review of Marika McCoola and Emily Carroll’s Baba Yaga’s Assistant (Candlewick Press, 2015)

Masha’s tale begins with stories from her grandmother about the witch Baba Yaga. Her grandmother was once kidnapped by Baba Yaga and had to outwit the witch in order to gain her freedom. Masha, delighted by these tales sees her grandmother’s life as one of adventure and wonders why she would have ever left Baba Yaga.
Masha’s father has recently been re-married and she discovers that although he never seemed to have time for her outside of work, he has time for his new wife and daughter. She feels out of place in her own home and when she runs away, she discovers a new home, but one that is unsettling and unsettled both by its strangeness and its propensity for walking around on chicken legs. Baba Yaga tests Masha to see if she is clever enough to get into her house before she is willing to take the girl on as an assistant.
In order to cope in the fairy tale setting of Baba Yaga’s world, Masha must call upon all of her folklore and fairy tale knowledge to outsmart beasts, magic, and impossible tasks. Her life is one that has become enmeshed in the reality of fairy tales, shaped by their premises that have a logic all their own.
Emily Carroll’s artwork weaves the mythical with the modern, blending the strange with the modern. She uses comic frames and backgrounds that meld and mesh the magic of a grimoire with the magic of needlepoint (an appropriate mixing because Masha tells us that her own grandmother acquired a needle and thread from Baba Yaga’s hut in her youth). For Masha’s remembering of fairy tales, Carroll switches to strong, simple colours with silhouette-like qualities to paint the tales with a sense of otherness and a sense of reverie. 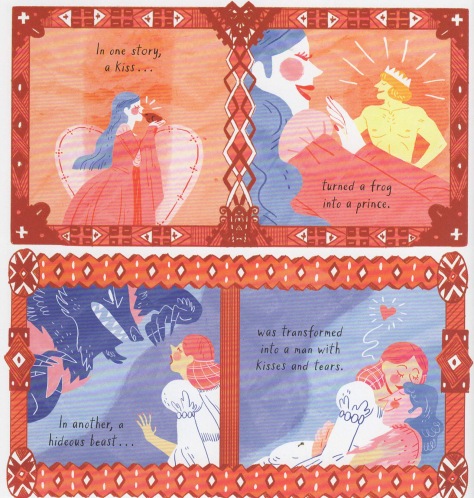 As much as this is a tale of wandering, it is also a tale of locating oneself, of finding oneself through tales and adventures. McCoola and Carroll’s Baba Yaga’s Assistant is a tale that reveals the power that fairy tales have to make us look at ourselves and our lives anew. It is a tale of self-discovery and a reminder that fairy tales can unlock doors of self discovery as easily as Masha opens the doorway to Baba Yaga’s hut.
To discover more about Baba Yaga’s Assistant, visit Candlewick Press at http://www.candlewick.com/essentials.asp?browse=Title&mode=book&isbn=076366961X&bkview=p&pix=y&nbsp;